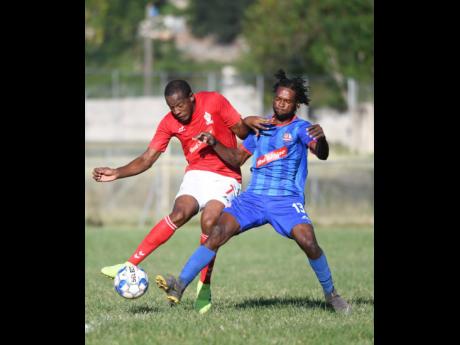 UWI FC’s Ryan Miller (left) attempts a shot at goal while under pressure from Dunbeholden’s Shevan James during the Red Stripe Premier League encounter at the UWI Bowl last Sunday. The game ended 0-0.

Technical director Rudolph Speid will be proud of the performance of his players after steamrolling Molynes United 4-0 on Sunday. They are now on 31 points and squarely in the play-off hunt as the home stretch of the regular season begins. Speid will be proud of the fact that he is managing to remain competitive but still able to fulfil the club's primary objective of getting local players overseas. But he also has faith in his young players having a big say in their play-off chances. They will travel back to Royal Lakes to face Dunbeholden once more to start the third round hoping to avenge their defeat from two weeks ago.

Tivoli Gardens have flexed their offensive might in the last couple of games with their second straight 3-0 win last Sunday. Their latest victims were Humble Lion as they notched their fourth away win of the season. Their revival under the Admiral Bailey and Phillip Williams partnership now sees the club making a real charge towards the play-offs. They move to 29 points, three points from the top six and given that Humble Lion and Arnett Gardens both lost on the weekend, they should be wary of the challenge of the west Kingston club.

Ludlow Bernard had to wait until the 92nd minute but managed to get his first win as Harbour View's coach defeating Mount Pleasant 1-0 on Monday. The Stars of the East have managed to put themselves in the play-off hunt climbing to 29 points. Bernard who replaced Damion Stewart will have a chance for back- to-back wins when Harbour View host Mount Pleasant on Monday.

The defending champions were shut out for the past two games but managed to end the drought defeating Arnett Gardens 2-0 at the Spanish Town Prison Oval. While midfielder Lamar Walker recovers from his shoulder injury, the winners got offensive help from returning players Chevaney Willis and Ricardo Morris, who fired home the two goals that lifted the club to fifth place with 33 points. The final round begins on Sunday when they travel to Molynes United.

If the end of the first round for Molynes United was poor, then their second round is absolutely abysmal. They have only won one game between November 17 and last Sunday and have only scored eight goals within that period, while conceding 25. Their latest defeat came at the hands of Cavalier, a 4-0 shellacking at Stadium East. Their six-match winning streak at the start of the season seems like a distant memory but it is the only reason why they are still above the relegation zone. Saving themselves from the drop is still in their hands but they need to stop dropping points.

Humble Lion lost their second straight game at home losing 3-0 to surging Tivoli Gardens. They were no match for the west Kingston team as they lost an opportunity for them to separate themselves from the other play-off contenders. With the gap between the other contenders getting closer by the week, there is no room for any mistakes going into the final round. The Andrew Price-coached team has had no luck with any of the west Kingston clubs this year losing to both in the space of three weeks. They will resume hostilities with Arnett Gardens looking to improve their current home form.

Arnett Garden's head coach Alex Thomas lamented his side's inability to convert their chances in their 2-0 loss to Portmore United on Sunday. The new year has not been kind to the Junglists so far as they are yet to win in 2020. They will have to be cautious as to not allow points to slip with Dunbeholden, Cavalier, Portmore and Tivoli Gardens lying in wait to pounce. They will return to Effortville Community Centre on Sunday hoping to knock off Humble Lion for the second time in three weeks.