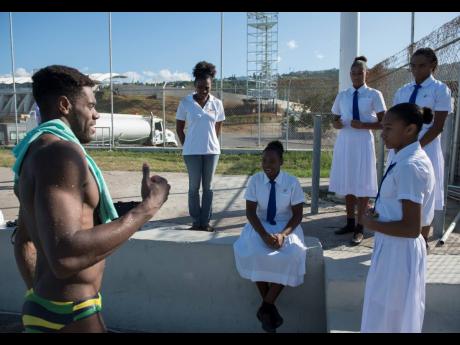 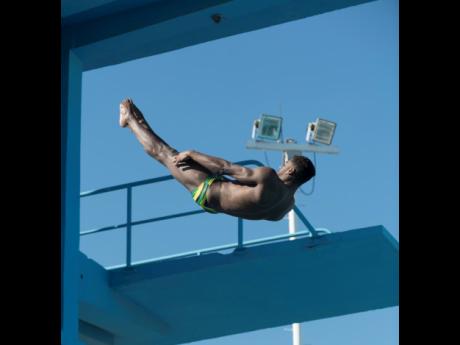 Knight-Wisdom midair after leaping off the diving platform at the National Aquatic Centre in Kingston on Thursday.
1
2

Olympian Yona Knight-Wisdom got the opportunity to impart diving knowledge to aspiring divers during his three-day visit to Jamaica last week. What he didn't expect was the reaction that he received on social media in doing so.

The Pan American Games 1m springboard diving silver medallist was captured on video and in photographs in a brief impromptu question-and-answer session with members of the Immaculate Conception High School swim team and the Kaizen Swim Club at the National Aquatic Centre last Friday, while preparing to execute another dive. While responding to the students' questions, Knight-Wisdom was wearing only his swim trunks. The reaction to the video was mixed with majority of the commenters saying that his attire was inappropriate.

The buzz that was generated on social media caught the 24-year-old by surprise.

Knight-Wisdom initially responded to the comments made, on Twitter, saying "Unfortunately this is the problem, too many negatives are found in swimming when it is such a valuable life skill. Don't find a reason to dislike it, understand the reasons to love it. The nature of my sport means I'm comfortable in swimwear...switch your perspective."

Last Friday night at the RJRGLEANER Sports Foundation National Sportsman and Sportswoman of the Year awards at The Jamaica Pegasus hotel, in New Kingston, Knight-Wisdom then sought to clarify what took place.

"I didn't expect any kind of reaction, to be fair," Knight-Wisdom told STAR Sports. "I literally just got out [of the pool]. I was in the middle of my session. I was putting my GoPro (an action camera) on to do a couple more dives. They had asked a question and I just wanted to give the best answer possible."

He, however, understands the reaction to the video but maintains that he was just trying to help the group who were absent from school to take part in the hour-long open training session.

"I understand how it looks," he said. "They are in their school uniform. That's because they missed school. They were literally going straight back to school. People can perceive it how they want but my intentions were fine, so I don't have a problem with it whatsoever."

Knight-Wisdom was honoured as Best Male Diver at the awards, where he was among this year's finalists for the top honour.

But he will continue his preparations for Olympic qualification at the British Diving Championships which take place this weekend, a precursor to the start of the 2020 season at the Diving Grand Prix in February.