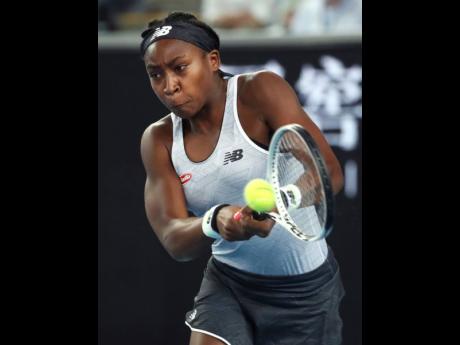 Everyone had the same question when the Australian Open draw was revealed: What were the odds that Coco Gauff and Venus Williams would face each other again in the first round at a Grand Slam tournament?

Gauff, 15, played Williams, 39, to begin her first appearance in the main draw at Melbourne Park, just like they matched up to start things off at Wimbledon about six months ago. And, just like at the All England Club, the youngest woman in the field got the better of the oldest woman in the field, with Gauff beating Williams 7-6 (5), 6-3 on Monday.

"I definitely was more confident this time. I think I was used to playing on big courts, so the crowd - I guess the size of the crowd didn't startle me as much as last time," Gauff said. "Definitely a bit more positive coming into this match."

It was the most anticipated contest of Day 1 at the first major tennis tournament of the decade, and it did not disappoint. The first set, in particular, was intriguing, with Gauff repeatedly pulling ahead, only to have Williams - who already had won four of her seven Grand Slam singles trophies by the time her foe was born - rebuff her.

It wasn't until her fourth set point that Gauff finally pulled it out. She quickly grabbed a 3-0 lead in the second and never let that edge go.

Gauff already has demonstrated all sorts of terrific qualities on a tennis court, from her big, gutsy serves to an ability to track down opponents' shots. Now you can add stick-to-it-iveness to the list.

The match was held in Margaret Court Arena, one of three stadiums with a retractable roof, and that was a good thing. The air quality was fine, but a heavy storm that arrived in the afternoon suspended nine matches on outside courts in progress and postponed.

Among the players who got a chance to play - and win - were Novak Djokovic, Roger Federer, 2019 semifinalist Stefanos Tsitsipas, defending women's champion Naomi Osaka, 23-time major champion Serena Williams, No. 1 Ash Barty and 2018 Australian Open winner Caroline Wozniacki, who is retiring after this tournament.