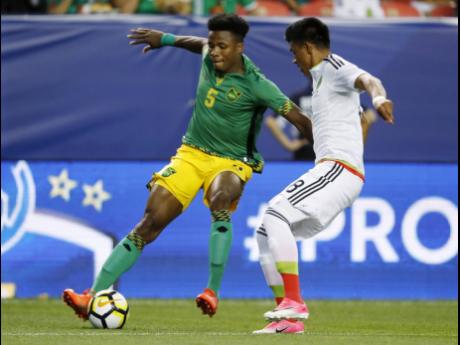 Alvas Powell (left) in action for Jamaica during the 2017 Concacaf Gold Cup.

Jamaican international Alvas Powell says that he is relishing the opportunity to contribute for his new Major League Soccer (MLS) club, Inter Miami.

The 25-year-old defender completed his first day of pre-season training with the team on Monday under the watchful eye of head coach Diego Alonso who will be taking charge in their inaugural season. Alonso who was appointed last December has had success in Mexico, taking Pachuca and most recently Monterrey to Concacaf Champions League success in 2017 and 2019 respectively.

Powell said that he is thrilled at the new opportunity as he did not expect to have landed at the David Beckham-owned franchise.

“I was at the national team camp and my agent told me I got drafted, I was speechless for a moment. I was like ‘woah’. This one is a big exciting task because I was not thinking of going to Miami, but as a player you always want to try your best to be on the best team,” he said on the club’s website.

This will be the second expansion team that Powell will be playing for and believes that the time spent at FC Cincinnati last season has equipped him well to handle his new team’s growing expectations.

“I learnt a lot in the past couple of years. New teams always have high expectations from the players. I’ve learnt a lot and I’m also willing to learn even more. My job is to get to know everybody on the team: players, staff, everyone, know my environment. I can’t wait to get to work,” he said.

Powell was selected by Inter Miami in the third round of the 2019 expansion draft after he was left unprotected by former club FC Cincinnati. Inter Miami’s sporting director Paul McDonough believes that his athleticism will have a key role to play in their inaugural year.

“He is a Jamaican international and we really like his game. He is athletic and plays at right back so that was very important to us,” he said.