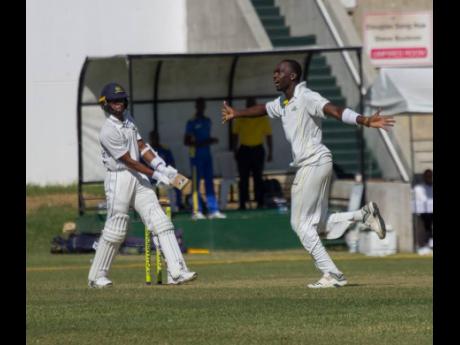 The batting woes, especially in their first innings, continues to plague the Jamaica Scorpions. A woefully inept batting display means that they are staring down the barrel against Barbados Pride, after yesterday's first day of action in the West Indies four-day championship game at Sabina Park. At stumps, the home team were on the run on 53 for six in reply to the Pride's first innings score of 219.

The Scorpions made four changes to the team that drew against the Windward Islands Volcanoes in the second round. Oraine Williams, Brandon King, Rovman Powell and Dennis Smith were brought in for Assad Fudadin, Paul Palmer, (due to a hand injury), Jamie Merchant and Aldane Thomas, while Justin Greaves and Kevin Stoute were left out of the Pride's 13-man squad.

Sent in to bat, the Barbados Pride never really got going, and lost wickets at regular intervals. Shayne Moseley topscored with 64, while Kyle Mayers made 53. Kraigg Brathwaite, 25, was the only other batsman to pass 20. The top bowler for the Scorpions was Markino Mindley, who bowled with good skill to take four for 31 from 13 overs. Powell also continued to prove his worth as a bowler in the regional four-day game, by claiming three for 65 from 19 overs. Nicholson Gordon picked up two for 28. When the Jamaica Scorpions replied, Chemar Holder proved to be an absolute menace, and threatened to run through the Scorpion batting line-up all by himself. Oraine Williams three, Brandon King three, Jermaine Blackwood one, John Campbell 26 and Powell six, all fell to the pace and movement of the impressive Holder. Powell's wicket off the last ball of the day, meant Holder ended with five for 21 from 7.3 impressive overs. The other wicket-taker was Kemar Roach, who claimed one for 21. Dennis Smith will resume this morning on seven not out, with Derval Green expected to join him.