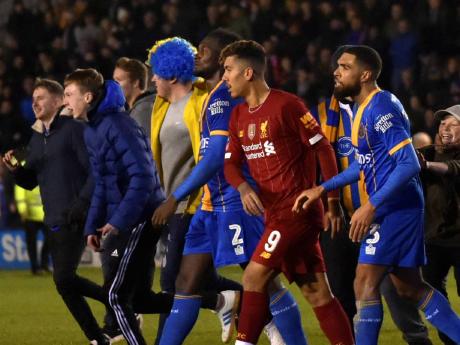 Liverpool’s Roberto Firmino (second right) leaves the field at the end of the English FA Cup fourth-round match between Shrewsbury Town and Liverpool at the Montgomery Waters Meadow in Shrewsbury, yesterday.

The sight of Mohamed Salah and Roberto Firmino entering as substitutes late in the second half really summed up Liverpool’s desperation in their FA Cup match against supposed pushovers from the third tier on Sunday.

Even the two superstar forwards couldn’t prevent the world, European and likely English champions slumping to their most embarrassing result in years in a quaint market town near the Welsh border.

Liverpool squandered a two-goal lead and was held to a 2-2 draw by Shrewsbury in a riveting fourth-round match between clubs separated by 59 places in the English soccer pyramid.

By the end, you wouldn’t know which team was the Premier League leader by 16 points.

Klopp said his line-up for the replay will be even weaker, with the game at Anfield next month coming in the middle of the first so-called “winter break” in the history of English football. The first-team squad will be having that break, Klopp vowed, so he’ll be playing the kids.

The team will be managed by under-23 coach Neil Critchley, Klopp added.