Salmon, Williams in for Scorpions 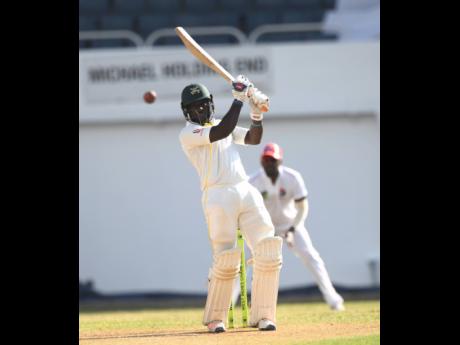 Two changes have been made to the Jamaica Scorpions team which will travel to face Guyana in the fourth round of matches in the Cricket West Indies Regional 4-Day Professional Cricket League (PCL) Championship from Thursday to Sunday.

Pete Salmon and Oraine Williams, who represent the St Catherine Cricket Club and the Central Titans, respectively. They have been brought in to replace Rovman Powell and Brandon King, who have been called to represent the Windies in a tour of Sri Lanka; they will join fellow Jamaicans Sheldon Cottrell and Fabian Allen.

Salmon, a right-handed middle-order batsman and spin bowler, is excited for the opportunity.

"I had a good season in the Super League with the Titans," Salmon said. "We won the title yet again and that has given me confidence. There's always room for improvement so I'll continue to work on getting better. However, this opportunity to represent Jamaica in the 4-Day PCL is a significant personal milestone. I'll be digging deep to give the team every advantage to come out on top."

Williams is happy to be chosen again this season.

"The team has not delivered any really favourable results yet, but we have an opportunity now to fix that," he said. "Guyana is a strong unit and facing them at home presents challenges. Our squad is capable of securing a victory away. We are one team with a similar dream so I'll have to do my part to support our best efforts to win."

Jamaica is winless in three matches and head coach Andre Coley believes that better performances are in store.

"Watching your team start a competition in the way we have cannot be easy for any fan or administrator to accept," he said. "Most definitely, the players and coaching staff are not pleased either. We know we can deliver better results, and we will. The performance is not down to just one thing, it's a combination of unfavourable matters - injuries, lack of concentration, the batting not yet settled, among other things," said Coley.

Jamaica travel to Guyana then return for two back-to-back home games, which will be played at the Trelawny Multipurpose Stadium, before playing three consecutive away fixtures. The Scorpions' final game in the competition will be a day-night match at Sabina Park from April 2-5 against the Trinidad and Tobago Red Force.