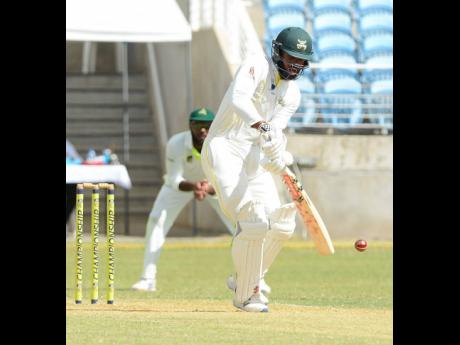 Jamaica Scorpions captain John Campbell plays a shot during his century against the Windward Islands Volcanoes at Sabina Park recently.

The Trelawny Multipurpose Stadium will be the venue for the Jamaica Scorpions' home matches in rounds five and six of the Cricket West Indies (CWI) Four-day Championship.

Round five is on today with the Scorpions facing the Leeward Islands Hurricanes in a match which ends on Sunday. In Round six (February 27-March 1), the Scorpions will host the Guyana Jaguars.

This will mark the venue's first staging of this competition; Sabina Park is listed as the official home ground of the Scorpions but CWI granted permission to play games there as all the standard requirements were met. This season, Sabina Park has not been a space with many happy memories for the Scorpions who eked out a draw against the Windward Islands Volcanoes and lost to the Barbados Pride in rounds two and three, respectively.

All about the quality

Captain John Campbell, however, is not focusing on the venue.

"It's all about the quality of the cricket that we play. The location of the ground is of little significance, there are more important factors to consider. The condition of the pitch and outfield; the existing weather conditions; the available players and their health, their form among other things. We focus on the best way to deliver the game plan designed by the coaching staff," Campbell said.

After four rounds of play the Scorpions sit in fifth place with 36.8 points, just a place above the Leeward Islands who anchor the table on 29.2 points.