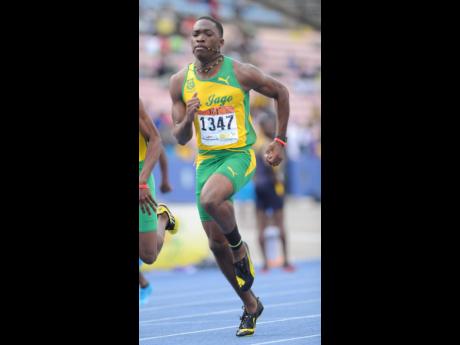 Manley competing for St Jago at the 2014 Boys and Girls’ Championships.

Martin Manley was once one of the most promising young 400 metres runners in Jamaica. The former St Jago High athlete had two glorious years in 2013 and 2014 where he was crowned World Youth champion in the 400 metres in Donetsk, Ukraine and followed up a year later won another gold medal in the same event at the Youth Olympic Games in Nanjing, China. Many predicted that Manley was destined for greatness and would have followed in the footsteps of another former St. Jago High athlete, Bertland Cameron. Cameron pocketed country's first gold medal at the World Athletics Championships when he won the 400m in Helsinki in 1983. Manley is a late bloomer. He was spotted as a real talent by then coach of the school, Danny Hawthorne, while running at a physical education class. He represented his school well at Boys and Girls' Championships and also the country in junior competitions but is yet to shine at the senior level. The 22-year-old left high school with one year of eligibility remaining to compete at Boys and Girls' Championships and went to the Blazers Track Club. With his performance still below the expected levels he packed his bags and went overseas in a bid to rejuvenate his career. He is now with five other Jamaicans, including quarter milers Akeem Bloomfield and Nathon Allen, at the MVP International Track Club based on the campus of Florida Atlantic University (FAU) in Boca Raton.

In a recent interview with STAR Sports Manley said he was optimistic about the future. He is now being guided by the very experienced Bahamian coach Henry Rolle. "I love this new environment here in Florida as training has been going great so far and I can't complain," he replied when asked about his new training set-up. "It is good to know that I am around guys who I grew up with at St Jago and also Akeem Bloomfield who I competed against then. He is now my training partner and it's great," added Manley.

He strongly believes that he can do something special this year. "Training with both Allen and Bloomfield has really helped me so far. Their drive, motivation and competitive edge have together helped to build my confidence," he said.

After competing in one race indoors so far he is looking forward to the remainder of the season. "I competed indoors in Kentucky for the first time (on a flat track) and I ran 21.4 seconds in the 200m. It was pretty good although I was a bit fearful that I would have fallen off the track," Manley said.

There are some very good 400m runners now earing national colours and Manley knows it will not be that easy to make it to the Tokyo Olympic Games. "I am not going to put any pressure on myself. I will just go out there and try and be competitive as this season is all about having fun and if doing so I get a time which puts me among the top three I will be grateful," he concluded.