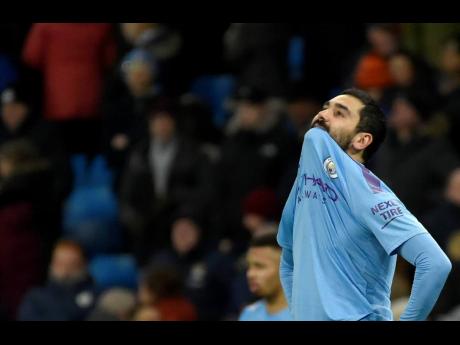 Manchester City’s Ilkay Gundogan reacts at the end of the English Premier League match between Manchester City and Crystal Palace at Etihad stadium in Manchester, England, on Saturday, January 18.

A club transformed by lavish investment, in part to promote the emirate of Abu Dhabi on the world stage, is damaged by deceptions in the pursuit of glory on the football field.

Cut through all the raging against the footballing prosecutors by City, UEFA showed there is a price to pay for misleading the governing body of European football.

If you don't play by the rules, you don't get to play in the Champions League. For two seasons in City's case. It doesn't matter if Pep Guardiola is the coach or you have some of the world's most expensive players in the team.

Banishing such a wealthy, powerful club from their elite competition was a test of resolve.

Not for the leadership of UEFA but the independent investigatory and adjudicatory bodies, with the final verdict decided by a panel headed by a European Court of Justice judge.

When City complained on Friday night that "this is a case initiated by UEFA, prosecuted by UEFA and judged by UEFA," it was a statement seemingly as misleading as some of their financial reporting.

City appeared to hope the public and UEFA would never discover they were allegedly funneling money around Abu Dhabi to fund sponsorships that helped to ensure they complied with Champions League spending rules.

Already there were questions about the club's reliance to raise revenue on sponsorships from Abu Dhabi, when they have been owned since 2008 by Sheikh Mansour bin Zayed Al Nahyan, a deputy prime minister of the United Arab Emirates and a member of Abu Dhabi's royal family.

The alleged scheming was only discovered thanks to leaked internal correspondence that City believe should be inadmissible because it is "hacked or stolen" materials. The club has never disputed the authenticity of the documentation gained by German publication Der Spiegel and published in 2018. Nor has it publicly challenged Financial Fair Play rules.