Bowen too good for Martinez 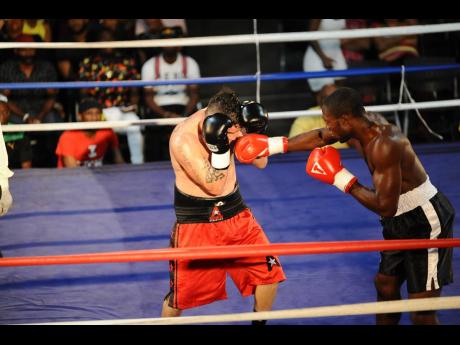 Super middleweight boxer Jermaine Bowen, from Savanna-La-Mar, was the outstanding performer for Jamaica last Saturday when he scored a unanimous decision victory over Angel Martinez from Miami, Florida. Their bout was the feature on a six-fight card staged by I-Fight Promotions at the Karl Hendrickson Auditorium, at Jamaica College in St Andrew.

An enthusiastic crowd turned up for the card, which featured boxers from Jamaica and Florida doing battle over four rounds, and this was the bout that they seemed to enjoy the most. The highly anticipated bout between Justin Mayweather, a brother of former World champion Floyd 'Money' Mayweather fizzled, as his replacement opponent Christian Foster, showed that he had few boxing skills, and was knocked out at 1:54.00 minutes of the first round.

Mayweather, who is in the early stages of his boxing career, went into the ring with a 5-0 record and really had no opposition, as Foster, with an 0-3 record, was unable to land a clean punch. Mayweather did all the scoring and dumped his opponent on the canvas quickly. A bemused Foster was then counted out by referee Owen Nelson.

Bowen, a southpaw, entered the ring with a record of three wins and two losses, and was decisive from the opening bell. The three judges, Clifford Brown, Lindell Allen, and Ransford Burton, all scored the fight 40-36 for him. He used his jabs to score early points, and as the fight progressed, he mixed it up with left hooks. His two-fisted attack kept him ahead all the way, against Martinez, who came into the fight with a record of eight wins and 10 losses.

In other bouts, Jamaica's heavyweight boxer Jermaine Richards made a successful professional debut when he scored a split-decision victory over Alvin Davie from the USA, Nico Yeyo scored a first-round technical knockout victory over Daron Weir, Alando Lewis outpointed another Jamaican fighter Fabian Tucker and Florida's Christopher Rodriguez had an early night, as his opponent Martin Anderson did not answer the bell for round three of their fight.

Chris Joy of I-Fight Promotions told STAR Sports that he was pleased with how the night went.

"We had some challenges and a few setbacks, but it all worked out well in the long run," he said. "I will be back in Jamaica with another fight card in a few months and that one will be even better."