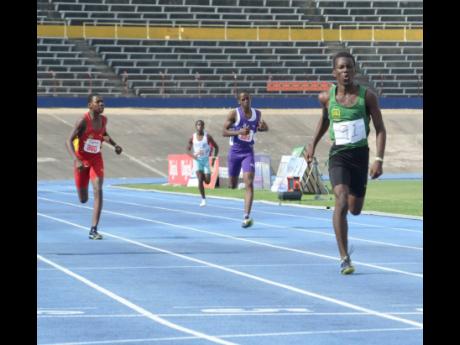 Calabar High School can count on some talented Class Four athletes to represent the institution over 400m at the ISSA/GraceKennedy Boys and Girls' Athletic Championships (Champs) next month. Requel Reid is one of them.

The former Victoria Primary School pupil, in St Catherine, won the 400m final at the Digicel Anthrick Corporate Area Development Meet at the weekend in a personal best of 53.01 seconds, ahead of teammate Dante Johnson, who ran 53.87s.

"I feel great, I wasn't expecting that time," Reid said.

The 13-year-old has high ambitious for what is going to be his first participation at Champs.

Reid's coach Rowan Gooden, however, thinks he is too optimistic.

"They have big dreams so they aspire to do big things," Gooden said, but he expected a faster time as he thought Reid would have ran under 53 seconds.

"I'm expecting anywhere between 51 and 50," he said. "He doesn't have a chance of medal as yet. But the aim is just to get him in the finals to deliver as much points as possible."

Calabar's Dante Johnson, who finished second in the same race last Saturday, is new to the programme.

"Johnson just came from the sprints to the quarter mile, so it will take a time for his body to adjust to the 400m programme," Gooden said.

Rohan White, who is Requel's guardian in Kingston, was impressed by his ward's run last Saturday.

"I noticed every week that he runs, he lowers his previous time," White said. At his first meet of the season at GC Foster in December, Reid ran 57s.

"Requel is a very disciplined and determined athlete. He takes instructions well and he doesn't give up."