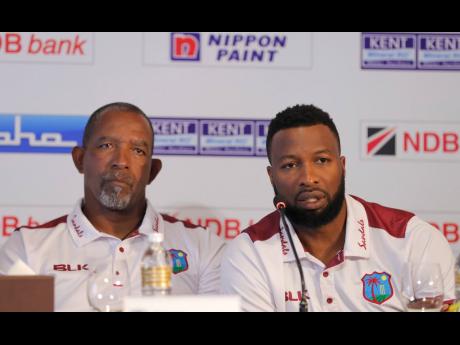 With just one point separating West Indies and Sri Lanka in the ICC One-Day International rankings, the skipper of the Caribbean side is heading into their three-match rubber here with expectations of overtaking the hosts in the standings.

West Indies captain Kieron Pollard believes his team is good enough to win the series, the first match of which will be played at the Sinhalese Sports Club tomorrow.

The two teams are closely locked on points in the ODI rankings. West Indies occupy ninth spot on 80 points while Sri Lanka are in eighth with 81 points.

And West Indies will be looking to build on the good work started late last year in the subcontinent and carried on against Ireland at home last month, according to Pollard, who is entering his third series as skipper since taking over last November.

"The squad has done a significant amount of work between the World Cup and this point. I think we proved in the Ireland series that we are a level above and we are now eager to see what the team can do against a more evenly matched opponent, in relation to standings. Hopefully, at the end of the day, the team that plays the best and most consistent cricket will come out on top," the 32-year-old all-rounder said Wednesday at a meet the press session where the series organisers and sponsors staged the official unveiling of the trophy.

Head coach Phil Simmons added that one area to be monitored closely is the bowling in the middle overs.

"As long as we have visibly improved, we will be happy at the end of the series. However, based on what we would've shown against India, I think an improved performance would see us coming out as winners. We have placed specific focus on improving our bowling, which I think we have been able to achieve and we are eager to test that theory against a strong Sri Lanka team," he said.