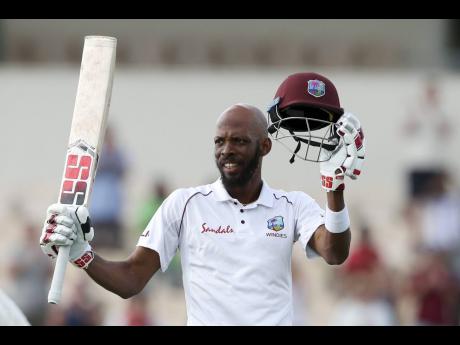 Roston Chase struck an imperious hundred as West Indies warmed up for tomorrow's opening One-Day International with a dominant six-wicket victory over the Sri Lanka Board President's XI here Thursday.

Playing in their final warm-up contest at FTZ Sports Complex, the Caribbean side easily chased down their target of 277 with 21 balls to spare, thanks to Chase's 136 (16 fours, one six) off 113 balls.

Opener Shai Hope hit a typically composed 85 off 102 balls while Sunil Ambris saw the Windies over the line with an unbeaten 34 from 44 deliveries.

The President's XI had earlier posted 276 for eight off their 50 overs with wicketkeeper Minod Bhanuka stroking a top score of 69 from 88 balls and Ramesh Mendis, batting at number seven, chipping in with a near run-a-ball unbeaten 64.

Asela Gunaratne carved out 47 off 56 balls in the middle order while opener Pathum Nissanka hit an enterprising 41 from 43 deliveries.

The hosts rebuilt to reach 47 for one in the 11th over after captain and opener Lahiru Thirimanne fell cheaply for four in the eighth over, but off-spinner Chase (2-57) struck twice as three wickets tumbled for 27 runs.

Stumbling on 74 for four in the 18th over, Bhanuka anchored two half-century stands to stitch up the innings and put the President's XI back on course for a competitive total.

A 24-year-old left-hander with a single ODI under his belt, Bhanuka struck four fours and a six, adding 69 for the fifth wicket with Gunaratne and a further 83 for the sixth wicket with Mendis, whose knock contained five fours and a pair of sixes.

Bhanuka was eventually sixth out in the 46th over, the second of seamer Keemo Paul's two wickets.