Under-20 Girlz bow into action tomorrow 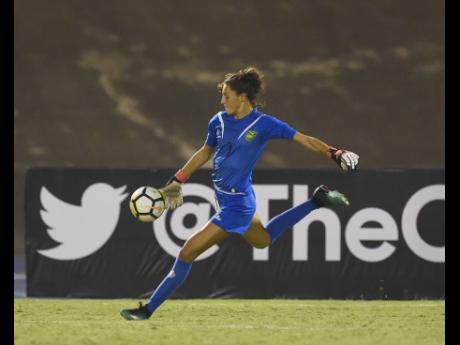 Jamaica’s Under-20 female footballers will bow into action on tomorrow’s opening day of the Concacaf World Cup qualifiers when they take on Guatemala in Group C in the Dominica Republic. Match time is noon.

The team is being coached by Xavier Gilbert who has replaced former coach Lorne Donaldson at the helm. Former national player Tashana Vincent is Gilbert’s assistant.

Gilbert, who has had success with the Under-20 team in the past, having led them to a Caribbean Championships title on home soil in 2014.

Michael Ricketts, president of the Jamaica Football Federation (JFF), says the junior Reggae Girlz face a very difficult task in the tournament, but he is very optimistic that they will do well.

“I think we have a good set of girls, but it is going to be tough because the draw is tough and we are only playing for two positions,” said Ricketts.

“Panama and Costa Rica will get two automatic spots and so it is left for all the others to fight for the other two positions and so it is going to be a challenge for us,” he said. The JFF boss added that he has been in contact with the coaching staff since the team’s arrival in the Dominican Republic and everyone is very upbeat.

“They have been in the Dominican Republic since Sunday and I have had discussions with the coach and he did indicate that everything is going well and girls are looking forward to the start of the tournament,” Ricketts said.

The Under-20 squad includes three players who went to last year’s FIFA Women’s World Cup in France. Outstanding goalkeeper Sydney Schneider is in the squad along with Jody Brown and Olufolasade Adamolekun. The Jamaicans will oppose El Salvador in their second match in the tournament on Monday before closing out their campaign against Canada on Wednesday, February 26. The top two teams at the end of the tournament will qualify for the Under-20 World Cup, which will be held later this year.