Tomohawk ready to go the distance 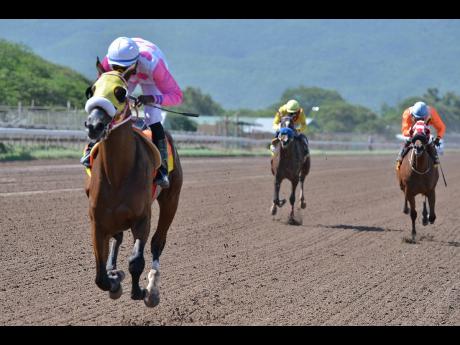 Tomohawk ridden by Omar Walker won the fifth race a head of Powerman and Crafty Zella Zeen at Caymanas Park on Staurday August 10, 2019.

TOMOHAWK, the horse who would have been champion two-year-old last year, were it not for Gary Subratie's irrepressible WOW WOW, continues his quiet preparation for this season's two-turn, three-year-old classics, the Jamaica Derby and St Leger, before which he will undoubtedly line up in the 10-furlong Governor's Cup in May.

Since debuting with an eight-length win at five furlongs round last August, TOMOHAWK has chased home multiple winner WOW WOW more times than any other horse, finishing second to the classics' winter-book favourite on three occasions, getting within two and a half lengths in December's Jamaica Two-Year-Old Stakes at a mile.

TOMOHAWK narrowly missed out on four second-place finishes to WOW WOW, denied by a head, by his own stablemate, ENGLAND'S ROSE, when she was made to eat humble pie by Subratie's monster in the Bearings and Accessories Trophy at five and a half furlongs in September.

At nine furlongs and 25 yards on Wednesday, TOMOHAWK's finishing power is being sharpened for two-turn races in which he will face WOW WOW and Ian Parsard's MAHOGANY, two naturally pacy horses whose stamina limitations will be sternly tested at a distance of ground, especially with lightning-fast ENGLAND'S ROSE seemingly back to herself after a recent runaway victory.

TOMOHAWK was again eaten for speed by easy-winner MAHOGANY at seven furlongs on January 18 but ran an even race throughout, finishing second ahead of NIPSTER. Going longer, TOMOHAWK, a Natural Selection colt, will have no issue with route races and presents the biggest threat to the pacy trio of WOW WOW, MAHOGANY and ENGLAND'S ROSE when lined up at a distance of ground in the classics.