Catch me if you can – Toona Ciliata 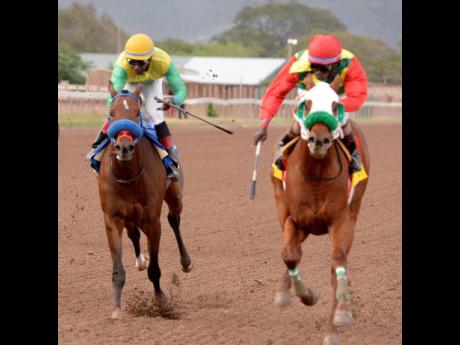 TOONA CILIATA and SENTIENT, two of a handful of horses who now represent grade-one runners, line up in an open allowance for the King's Plate, going seven and a half furlongs Tomorrow.

Arguably the most improved three-year-old at the end of last season, Anthony Nunes' TOONA CILIATA notched five wins for the year, three at the back end, interrupted only by a second-place finish in the Superstakes and third in the Diamond Mile, events won by Horse-of-the-Year SHE'S A MANEATER.

TOONA CILIATA's worst run was his 13th, and last, of a grueling season, December 7, 10 days after landing the Nigel Nunes Memorial.

In his bid to scrape every dollar in purse money to keep Wayne DaCosta at bay, Nunes, ensuring he stayed on course to win his first trainers' title, sent TOONA CILIATA to run his 24th furlong after the 10-furlong Superstakes, the seven-furlong Gladiator Trophy, in which the by-now winded gelding could only manage third place behind stablemate EXHILARATE and SUPERLUMINAL.

Having sat out a well-deserved three-month lay-up, TOONA CILIATA butts heads with Gary Subratie's SENTIENT, who he had behind him no fewer than four occasions last season, starting from the 2000 Guineas when he was second to stablemate and Triple Crown winner, SUPREME SOUL.

SENTIENT has been on a roll since last Boxing Day, handed three gifts, trotting up on the sluggard, DUKE, to close his three-year-old season in a non-winners-of-three, before two equally easy victories as a four-year-old, overpowering short-running KINGSMAN at seven-and-a-half furlongs and long-in-the-tooth HOVER CRAFT at a mile.

Though sitting six pounds lighter than TOONA CILIATA and having four runs under his girth since Nunes' runner last raced on December 7, SENTIENT will find his old rival giving no quarter in what will be a virtual match race.

TOONA CILIATA showed that he hasn't lost a step since last season, blazing five and a half furlongs in 1:05.3 two Saturdays ago, followed by 1:13.3 for six furlongs. SENTIENT is race-fit and need not show any such gallop but faces grade-one opposition as opposed to the fodder that were thrown at him in his three consecutive victories.

It will be a case of catch-me-if-you-can when TOONA CILIATA leaves the half-mile with Linton Steadman, the jockey who rode him to second-place finishes in the St Leger and Superstakes.