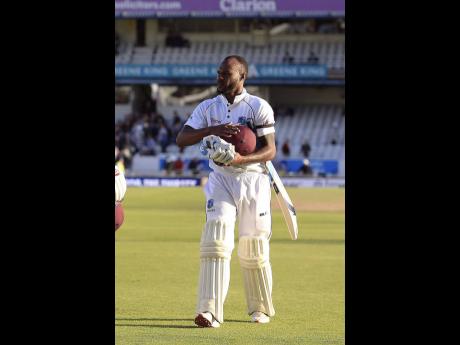 Not only did the visitors lose the encounter by two wickets but the outing marked the sixth time for the season Blackwood had scored a half-century without being able to convert to triple figures.

Frustrated, the 28-year-old turned to seasoned Windwards campaigner Devon Smith - a veteran of 217 first-class matches and nearly 15,000 runs - for advice after the contest in St George's.

"I told him every time when I'm in the 80s or 50s I just get out very softly and he [said] 'Just stay calm, try to score, don't overthink the situation'," Blackwood told Starcom Radio's Mason and Guest Cricket Show on Tuesday.

What transpired in his next innings against Leeward Islands Hurricanes was monumental. The right-hander carved out a record-breaking 248 - the second highest score for Jamaica in the last 54 years and the seventh highest overall in the history of the championship.

However, it was the manner in which he reached 100 and 200 which reflected Smith's advice. On 93, Blackwood struck two consecutive boundaries off seamer Jeremiah Louis to storm to his fifth first-class century.

Then, on 196 the following day, he reached his maiden first-class double hundred in the morning's first over with a classic square drive for four.

"When I was on [97], I told myself once I got a loose ball I'm going to put it in the boundary. I'm going to stay positive and I did exactly that," Blackwood explained.

Blackwood finished the season as the leading runscorer with 768 runs at an average of 51, the only batsman to pass the 700-run mark.

The Jamaican has played 28 Tests with modest success, his last outing coming when he appeared as 'concussion substitute' for Darren Bravo, during the second Test against India at Sabina Park last September.

Before that, his international career seemed in danger. He was dropped after just 15 runs in five innings and languished on the sidelines for two years.

With several changes made before the season, he now feels his career is back on track.

"I put in a lot of hard work behind the scenes. I told myself if I want to improve myself and improve my fitness and the way I think and the way I bat, I have to train more than one time," said Blackwood.

The season was suspended after the eighth round, 10 days ago because of the outbreak of the coronavirus pandemic in the Caribbean, and finally aborted on Tuesday.