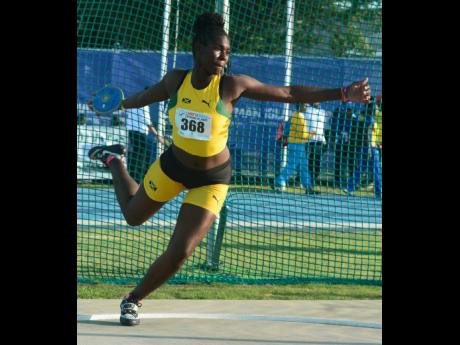 Jamaica’s Cedricka Williams competing in the Under 17 girls discus at last year’s Carifta Games in the Cayman Islands.

Track and field's regional governing body, the North American, Central American and Caribbean Athletic Association (NACAC), said it did not anticipate any major issues arising after the 49th CARIFTA Games was pushed back until next year because of the novel coronavirus outbreak.

Bermuda, which was expected to stage the region's premier junior track and field championship over the Eastern weekend, has been retained as host, and the Games will still be designated the 49th edition.

Guyana, originally slated to host next year's showpiece, will now be the venue for the 2022 event.

"To be quite honest with you, I don't see any logistical problems beyond the fact, obviously, the challenge now for Bermuda would be to confirm hotel accommodation, which I believe they're in a good position to do simply because we have a year out to do it," said Mike Sands, president of theNACAC.

"And obviously, [there is the issue of] the travel arrangements into Bermuda. We had several charters lined up that were going to fly from the region, including one from Trinidad and one from Antigua."

The decision to postpone the CARIFTA Games was arrived at after talks between the Bermuda National Athletics Association, the CARIFTA local organising committee, the Bermuda government, and all CARIFTA countries.

Antigua and Barbuda was the first nation to announce its withdrawal from the showpiece in early March, and with COVID-19 already affecting several other Caribbean countries, it quickly became apparent that the Games were in serious doubt.

Already, Bermuda has recorded 57 cases and five deaths, with the Caribbean having reported thousands of confirmed infections.

Bermuda's Sports Minister, Lovitta Foggo, said government fully endorsed the decision to postpone until next year, and Sands it was important the country was allowed to continue as hosts.

"We took a decision that we would give them the Games in 2021 and it would still be the 49th edition of the Games," he pointed out.

"We've already cleared that with them because we've been in constant communication with them."

Up to 27 teams had been expected to contest the CARIFTA Games.