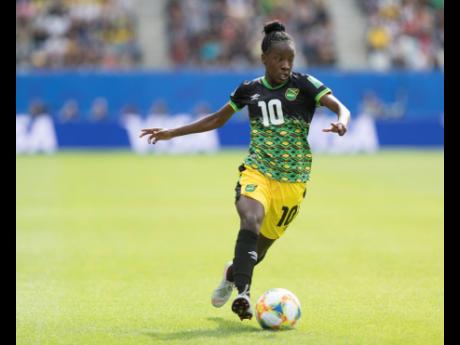 Although the world is still trying the navigate the coronavirus pandemic which has robbed human beings of normality, young Jamaican striker Jody Brown got the opportunity, over the weekend, to enjoy a significant milestone in teenagers' lives, graduating from high school.

The 18-year-old Brown took to social media to celebrate her graduation from Mountverde Academy in Florida, completing a four-year journey which started in 2017.

In an Instagram post yesterday, Brown is seen in her purple cap and gown enjoying the moment with her classmates while looking forward to her future.

"What feels like the end is often the beginning," she posted.

The post was liked by her national teammates, including Khadija Shaw and captain Koyna Plummer. It also received numerous comments conveying well-wishes.

Brown led the Mount Verde Eagles in goals during the 2017-2019 seasons and helped to win two consecutive state championships in 2018 and 2019.

She was named the Orlando Sentinel Girls Soccer Player of the Year in 2019 after her 32 goals and nine assist season helped the Eagles to an unbeaten campaign. In the midst of her high-school career, she made her senior debut at age 16 in 2018 and was a part of the Reggae Girlz historic qualification and participation in last summer's FIFA World Cup in France.

She was named best young player at the 2018 Concacaf Women's Championship. She was also called to the senior team for the Pan American Games held in Peru last August. Her most recent call-up was for the under-20 national team at the Under-20 Concacaf Women's Championship last February. She scored nine goals in the tournament, but the young Reggae Girlz were eliminated in the quarter-finals, unable to qualify for the Under-20 Women's World Cup.

She will begin her collegiate career this fall with top NCAA division one college Florida State University, having committed to the school last November.