Disinfecting the ball being considered by Aussie cricketers 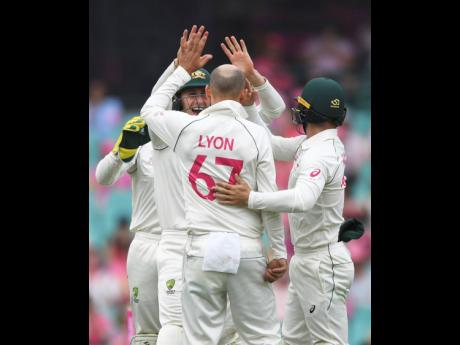 Australia’s Nathan Lyon (67) celebrates with teammates after bowling New Zealand’s Tom Blundell on day three of the third cricket test match between Australia and New Zealand at the Sydney Cricket Ground in January.

Disinfecting the ball during practice and matches is being considered as elite cricket players in Australia prepare to return to training during the coronavirus pandemic.

The International Cricket Council (ICC) has already indicated the use of saliva to shine the ball, which helps bowlers swing it through the air, will be banned when the sport resumes.

Players using sweat to polish the ball will be OK under cricket's revised guidelines, but may contravene government rules in some places.

"Disinfecting the ball is a consideration," Alex Kountouris, Cricket Australia's head of sports science, said yesterday. "We don't know the impact on the ball (yet) because we haven't tested it.

"We'd have to speak to the ICC and get permission, there's a lot of things (to consider). And whether it's effective or not. The ball being leather, it's harder to disinfect because it's got little nooks and crevices ... but it's absolutely a consideration."

Kountouris said some people, particularly bowlers, would find it hard to get used to the new rules, which are aimed at increasing the health and safety of players.

Kountouris said other guidelines in place as elite players start returning to practice in Australia this week specified no sharing of equipment and promoted extra cleaning of facilities, and an emphasis on hygiene.

Like most sports around the world, cricket was suspended as countries went into lockdown during the pandemic. Travel bans and other restrictions are being gradually eased in Australia, and local administrators are hopeful that matches can be played in the last few months of 2020.