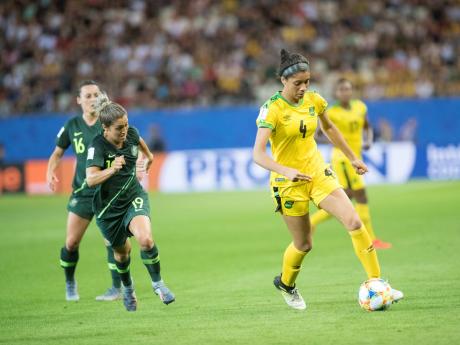 The 21-year-old Swaby celebrated her graduation from Rutgers University recently with a bachelor's degree in sports management. She posted a picture on Instagram of herself at the university in her cap and gown with a simple caption, "Done". Among those who wished her congratulations were her sister and fellow national defender Allyson Swaby, who commented, "Really nice words to summarise all the hard work and dedication you've put in over the past four years. Couldn't have said it better myself."

During her collegiate career, Swaby's performances have seen her being named to the All-Academic Big Ten team from 2017-2019. She was named to the Big Ten All tournament team in 2016 as a freshman in 2016. The Rutgers Scarlet Knights have made it to the Division One women's tournament in each of the four seasons Swaby has played. She missed four conference games in 2018 as she helped the Reggae Girlz secure their historic qualification to the FIFA Women's World Cup last summer where she started in all three group games.

She started 13 games in 2019, her senior season, helping the back line to post six clean sheets. Her performance earned her a selection to the All Big Ten Third Team

Swaby was selected by Sky Blue FC of the National Women's Soccer League (NWSL) with the 29th overall pick, becoming the seventh Rutgers player to be drafted to the league in the last five years. The start of the 2020 NWSL season has been delayed because of the coronavirus pandemic, but recent reports suggest that the league is targeting a return in June with a tournament-style competition. Another Reggae Girlz defender, Konya Plummer, also recently earned a Bachelor of Science in Interdisciplinary Studies, Health & Education, with a minor in Sociology from the University of Central Florida.