Jockeys victimised by theft at Caymanas 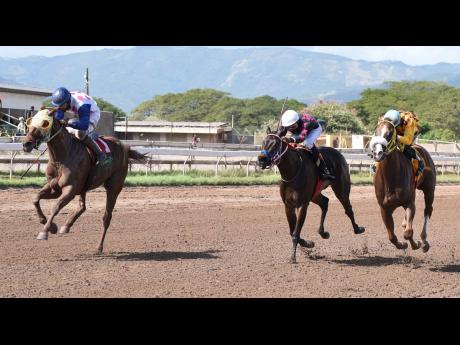 AZARIA (left) ridden by Oshane Nugent, finishes ahead of CONTRACTOR, ridden by Aaron Chatrie at Caymanas Park on Saturday, February 1. 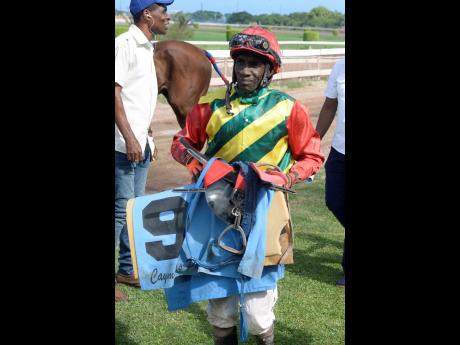 Apprentice jockey Oshane Nugent says he is very sad and disheartened after his helmet and goggles were stolen from the jockey's room at Caymanas Park more than a week ago.

Nugent said that the helmet, valued at more than $30,000 was stolen on June 20 after it was left outside his locker by his valet.

"I am feeling very bad about it because today, I have been borrowing goggles and a helmet to ride in," Nugent told STAR Sports last Saturday.

"My valet didn't remember to put them in my locker, so he left them in the jockey's room and someone stole them.

"I can't find them and I am very upset about this because I hear a lot of other men crying saying that they are losing gear and men are taking away their British pants and all those things."

Nugent said that he has since reported the incident to stewards at Caymanas Park., and he is urging his fellow jockeys to stop stealing from each other.

"I have been to the stewards room and told them about it, but I haven't gotten a response from them yet," he said. "I am a young apprentice, who is just coming into the field and to know that they are stealing my things is very sad."

Stolen from the lockers

Another apprentice jockey, who asked for anonymity, told STAR Sp orts that he has seen situations where jockeys have had their underpants and T-shirts stolen from the lockers in the jockey's room in the past.

Jockey's Guild Association president Shane Ellis said he is aware of the situation with Nugent and he too has made a formal complaint to the stewards at Caymanas Park about it.

"They are going to deal with it in a very strict manner and we are going to take it step by step and see what is going to happen because it can't work like that," he said. Ellis said that former champion jockey Anthony Thomas' cell phone was also stolen from the jockeys' room in March.

"We are not supporting any thieves among us because we must live as one, so I am very disappointed about how the jockeys are behaving," he said.

Nugent began riding in December, has won six races in his career so far.