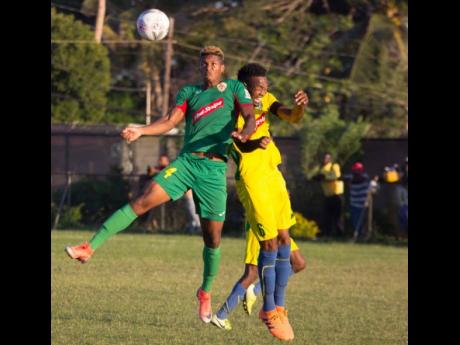 National striker Andre Clennon says he has been working hard to improve his fitness in a bid to maintain his place in the Reggae Boyz team for upcoming World Cup qualifiers.

Clennon, 30, last represented the national team in a friendly international against Bermuda at the Montego Bay Sports Complex on March 11.

The experienced attacker, who has four caps for the Reggae Boyz, told STAR Sports that his dream is to represent the country at the 2022 World Cup in Qatar.

"I have been working out in the daytime by doing some jogging and strength work because I have a gym at home where I do my exercises daily," said Clennon.

"For me, I think I am one of the best post-up strikers in this current team because I doubt there is another striker like that in the team, and so once I am ready, then I think that a striker like me will be needed in the side," he added.

"The aim is always to play for your country, especially in a World Cup tournament, and these World Cup qualifiers will be a step in that direction for me," said Clennon, who is yet to score a goal for the country in his four appearances.

The former Bridgeport High School Manning Cup standout is currently on the books of Red Stripe Premier League team Humble Lion. He netted five goals for the club this season.

Before joining Humble Lion this season, Clennon represented Kesla in the Azerbaijan Premier League in the 2018-2019 campaign, where he netted four goals for the club in 26 appearances.

The lanky striker noted that he is aiming to return overseas once the COVID-19 pandemic clears up.

"In January, I was supposed to leave to play overseas, bu,t unfortunately, I wasn't able to leave because of my kids, and then the coronavirus came in, and so I have to remain in the country," he said.

"The aim is to go back to Azerbaijan, where I was playing, or even somewhere in Asia, because a lot of clubs there are interested in me," he stated.