Residents using cricket to fight violence in ‘Back To’ 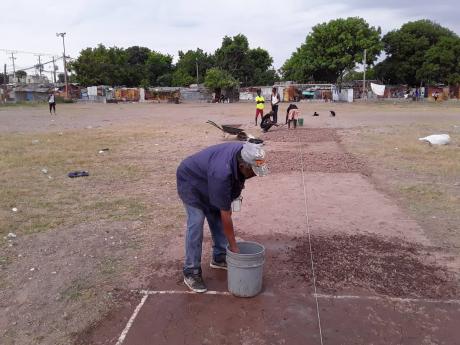 Team manager Ronny Lyons (foreground) works on a cricket pitch in the community of Majesty Gardens, otherwise called ‘Back-To’. Lyons is responsible for the creation of a new cricket team in the volatile community, which he hopes will help to stem violence in the area.

As violence continues to rear its ugly head across the country, Ronny Lyons, a resident of inner-city community Majesty Gardens, is using the sport of cricket as a mean of curtailing crime in the community.

Majesty Gardens, which is known as 'Back To', is located in South Andrew South, which is currently under a state of public emergency.

The community saw a massive spike in murders and robbery towards the end of last year, with a number of youngsters being killed, which resulted in security check points being placed in the area.

Lyons, who has been living in the community for over 60 years, said that a cricket team was formed with the aim of uniting the residents.

"This cricket team that we have in Majesty Gardens is aiming to curtail the youths from the violence in the community and stop them from idling around the community," said Lyons. "This cricket team can help them to get a bright future in life because some of them have lost their parents to gun violence,and so we don't want anymore of that to happen again."

"This is why we are revitalising our cricket team because it has been over 20 years since we have had a cricket team in this community. I think that this cricket team will give them a lot of opportunities because it can open many doors for them," Lyons added.

Lyons stated that after forming the team at the end of last year, the youngsters in the community have been coming out to show their support and love for the game.

"We have seniors and juniors coming out to support it, and everyone is loving the sport because it is bringing everybody together in the community," he said.

"We recently built a pitch because before that, we were playing on a dirt surface, and so we put some money together and paid a truck to get some clay for us," Lyons said.

"I must thank him (Heaven) for that because we don't really have any equipment, and Billy Heaven saw our needs and he came on board and helped us out," he said.

"Our aim is to enter into the SDC T20 because this will be a good start for us, and so we are looking forward to that this year," Lyons stated.