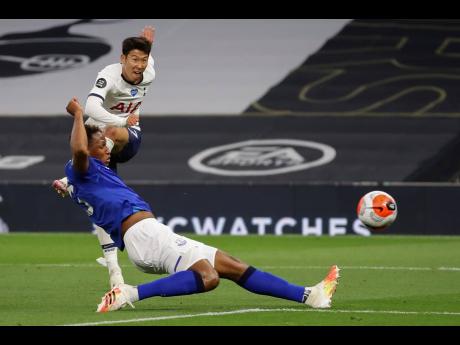 When Tottenham captain Hugo Lloris confronted Son Heung-min on the field at halftime, Jose Mourinho was far from annoyed.

The manager renowned for his own flashpoints and volatility was delighted to see tensions between teammates erupting in public view.

"It was beautiful," he said. "Probably it's a consequence of our meetings."

Angered by the timidity of a 3-1 loss at Sheffield United in the previous English Premier League round, Mourinho saw the passion he wanted as Tottenham this time secured a 1-0 victory over Everton yesterday.

Just before the break, with Tottenham leading, Son lost the ball which led to Richarlison having a chance to equalise but striking wide of Lloris' post.

"I think to concede a chance a few seconds before halftime because we don't make the pressing properly," Lloris said, "that annoys me but it's part of football. Move on."

Only, Lloris didn't when the whistle blew for halftime, shouting as he raced over to Son. Giovani Lo Celso and Harry Winks intervened to split the clashing teammates before they headed into the dressing room.

Son had created the goal in the 24th minute. The South Korea forward knocked the ball forward to Harry Kane who squared for Lo Celso to strike on the turn and Everton defender Michael Keane deflected the ball into his own net.

"An amazing kid that everyone loves like Sonny, a team boy," Mourinho said. "But in that situation the captain thought the last minute of the first half you have to do more for the team. You have to give a different effort than you give. A couple of bad words, but I think it's something very important for the team to grow up."

In the dressing room, Mourinho told them: "I have no doubt you will stick together until the end."

That they did. Tottenham moved up to eighth place with their second victory from the four games since the league resumed after a three-month suspension.

But it's not only the hopes of returning to the UEFA Champions League that are in the balance for Spurs. Even qualifying for the Europa League is uncertain with five games remaining.