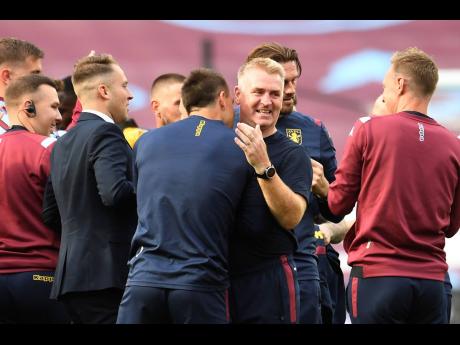 Once the final whistle blew on the longest English Premier League, 352 days after it began, there was a sense of relief and grief for Dean Smith.

There was joy at Aston Villa avoiding relegation on the final day of the pandemic-interrupted season and sadness for the manager, who could not share the achievement with his father.

Ron Smith was one of the 45,752 recorded coronavirus victims in Britain, dying in May at the age of 79 during the league's shutdown.

"It's been emotional," Dean Smith said after Sunday's 1-1 draw at West Ham. "I'm sure he'll be looking down on us."

The point earned in east London kept Villa just above the relegation zone. Bournemouth and Watford joined Norwich in dropping into the second flight of competition.

When the league was suddenly halted in the second week of March, after coronavirus infections were reported at Arsenal and Chelsea, Villa was two points from safety and used the hiatus to regroup.

"I thought we used it really well," Smith said, "We had to because we couldn't keep doing what we were doing."

Throughout the unprecedented 100-day pause in play, uncertainty persisted over whether the season would resume at all. Safety concerns collided with self-interest and fears about the billion-pound bill for not completing the 380 games.

It was a test of resolve for new Premier League chief executive Richard Masters, but Project Restart was accomplished.

Rules restricting the number of people allowed in stadiums to 300 meant that when Liverpool fulfilled its 30-year mission to be champion of England again, players lifted the Premier League trophy in an empty Anfield.

But there was no asterisk on the title triumph. The full programme of games was completed, unlike in France, where Paris Saint-Germain was declared champion of a curtailed season.

Leicester would have preferred the league positions in March to be the final standings. No team suffered more after the restart in June than the 2016 champion, blowing an eight-point cushion in the Champions League places.

The capitulation was completed by Sunday's 2-0 loss to Manchester United, which took the last Champions League place off Brendan Rodgers' line-up.

The game-changer was Manchester City's big off-field success in a season when the eventual runner-up was dethroned by Liverpool. City lawyers convinced the Court of Arbitration for Sport to overturn a two-year ban from European competitions which meant fifth place - where Leicester finished - no longer provided entry to the Champions League.