A tricky test for Cryptocurrency, Top Shelf and Baltusrol 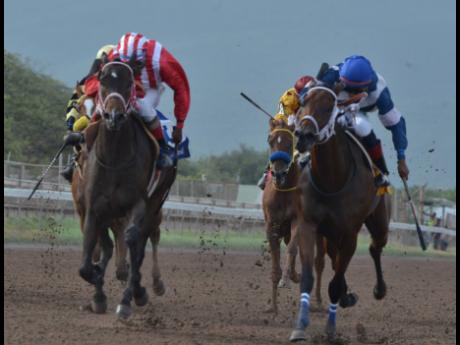 Saturday's $850,000-800,000 optional claiming at five furlongs round could get really tricky, considering the many variables at play in the quick dash.

The runners to keep an eye on are those competing on a tag for the first time - CRYPTOCURRENCY, TOP SHELF and BALTUSROL - technically down in class against rivals all beaten by the form horse, POLLY B, whose presence all but ensures that the winner will not go gate to wire.

POLLY B tore away from $850,000 claimers, at five and a half furlongs, two Saturday's ago, ripping splits of 22.2 and 45.3, forcing a declining MR UNIVERSE to pay his respects and close from off the pace for second.

MR UNIVERSE was also outsped by POLLY B when the in-form eight-year-old was caught close home by NUCLEAR THUNDER, on July 4, at five furlongs straight. NUCLEAR THUNDER had actually franked his form after finishing an even fourth behind PRINCE CHARLES, WAR TIME and ANASO on June 27, going six furlongs.

POLLY B, therefore, is the speed-marker horse against all potential leaders, especially breaking from the plum inside draw at five furlongs round. However, at 118lb, POLLY B is either giving weight or sitting level with the down-in-class trio, CRYPTOCURRENCY, TOP SHELF and BALTUSROL, none of whom are strangers to a strong pace.

Whereas BALTUSROL is expected to come around quickly to pounce from his wide draw at stall eight and TOP SHELF could play the stalking game, CRYPTOCURRENCY is an enigma, who could do either, except that her speciality is to haul up at various points of her races.

Oneil Mullings knows her best and has been kept aboard by Philip Feanny due to her quirkiness, which she pulled off as recent as June 27. Leading PRINCE CHARLES and company into the lane, she pulled up the handbrake a furlong and a half out, losing six lengths and dropping back to eighth place, before attempting to run-on, gaining two lengths inside the final furlong.

Last Saturday, CRYPTOCURRENCY moved as a team with FATHER PATRICK in mid-pack but was knocked off her stride by GOD OF LOVE heading into the half-mile. She was still beside DUKE up to a furlong out, burnt by splits of 22.2 and 45.2 after FATHER PATRICK outclassed the field coming off the turn.

Finishing 10th of 12 runners far from tells the tale of CRYPTOCURRENCY's run, which she can certainly turn around. Note how she competed in her previous race, third up to a furlong out behind two return winners, 2000 Guineas champion, WOW WOW, and UNIVERSAL BOSS.