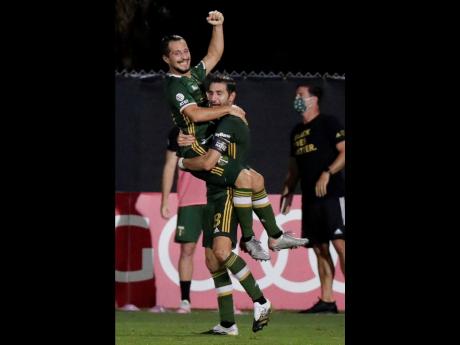 Portland Timbers midfielder Sebastian Blanco, top, celebrates his goal with Diego Valeri against the Philadelphia Union during the second half of an MLS soccer match, Wednesday, Aug. 5, 2020, in Kissimmee, Florida.

In light of Major League Baseball's trouble with its season, Major League Soccer's plan to resume play in its local markets is under scrutiny.

The league has been buoyed by the success of its MLS is Back tournament in Florida, which concludes tomorrow with the title game between the Portland Timbers and Orlando City. With teams headed home, the plan now is for an abbreviated season.

"It started with a tournament in a bubble, but in our minds, it had always been that we would get back into the markets at some point soon," MLS Commissioner Don Garber said. "And that transition from the successful tournament to playing in our home markets is no different than the process with our tournament: It is very closely following the guidance of our medical experts and our infectious-disease advisers and in consultation with the local health authorities and government officials in all of our local markets."

The tournament got off to a rocky start when both FC Dallas and Nashville were forced to withdraw because of positive coronavirus tests. But only two other players have tested positive in the bubble at ESPN's Wide World of Sports complex at Walt Disney World.

MLS, the National Women's Soccer League, the NBA and the WNBA have been able to successfully play games amid the pandemic but in controlled environments, with players sequestered from the general public. The NHL has resumed its season in "secure zones" in Toronto and Edmonton, and the league says it has not had any positive tests.

But MLB, playing in home stadiums without fans, has had some two dozen games postponed because of the coronavirus. Outbreaks have notably affected the Marlins and the Cardinals.

The NFL is planning games in the fall although 67 players have opted out. The players' association says that 56 players have tested positive since the start of training camps on July 26.

The USL Championship, the tier below MLS in American soccer, has been playing in local markets since July 11, but there have been more than a dozen games postponed because of positive tests. LA Galaxy II has had 11 positive tests.