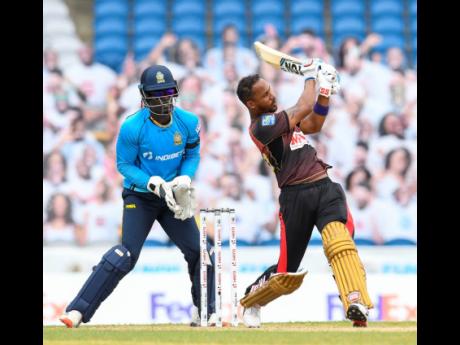 Trinbago Knight Riders (TKR) clinched a record fourth Caribbean Premier League title in imperious fashion when they made light work of St Lucia Zouks by eight wickets in Thursday's final to complete a historic unbeaten campaign in the franchise tournament.

Inspired by captain Kieron Pollard's four-wicket haul, TKR withstood an early onslaught to restrict Zouks to 154 all out with five balls left in the innings, with Andre Fletcher top-scoring with a classy 39 off 27 deliveries.

And the target proved inadequate for star-studded TKR as opener Lendl Simmons blasted an unbeaten 84 from 49 deliveries with eight fours and four sixes, and Darren Bravo, 58 not out off 47 balls with two fours and half-dozen sixes, to fire their side to victory with 11 balls remaining at the Brian Lara Stadium.

Zouks had early momentum when they reduced TKR to 19 for two in the fourth over but hopes of a maiden CPL title were then dashed as Simmons and Bravo combined in a third-wicket record stand of 138.

The triumph, before empty stands due to the ongoing COVID-19 pandemic, added to previous conquests in 2015, 2017, and 2018, and Pollard said it atoned for last year's disappointment of bowing out at the semi-final stage.