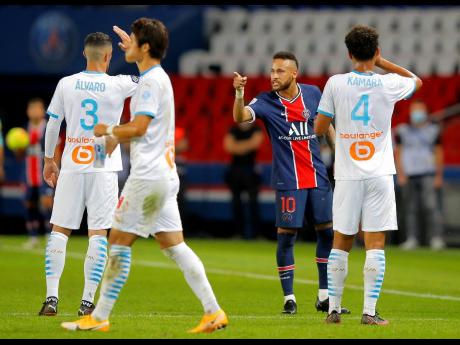 PSG’s Neymar argues with Marseille’s Alvaro (left) during their French League One match at the Parc des Princes in Paris, France on Sunday.

Neymar was one of five players sent off after an injury-time brawl including punching and kicking at Parc des Princes.

The Brazil forward was caught by VAR jabbing the back of Alvaro Gonzalez's head. Neymar told officials as he went off he was racially abused, and went on social media to say his only regret was that he didn't punch Gonzalez in the face.

PSG said it was looking forward to the LFP, the governing body of the top French leagues, investigating the facts behind a Ligue 1 match which featured 17 cards -- including reds to PSG's Leandro Paredes and Layvin Kurzawa, and Marseille's Jordan Amavi and Dario Benedetto.

In its own statement released yesterday, Marseille said Gonzalez "is not racist" and he has "demonstrated it to us by his daily behaviour since joining the club, as his teammates have already testified."

"This controversy is serious and already has serious consequences," Marseille said. "The club therefore condemns the dissemination of the private telephone numbers of Alvaro Gonzalez and his relatives on Brazilian media and social networks, giving rise since to constant harassment, consisting in particular of death threats."