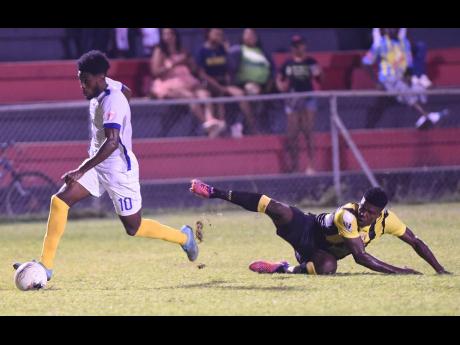 File Waterhouse’s Kenroy Howell (left) slips away from a tackle from Jerome Odilon (right) from Don Bosco during a Concacaf club football match at the Anthony Spaulding Sports Complexon in February 2, 2020.

Although they will navigate a much different path in the 2020 edition of the Concacaf League, Waterhouse FC President Donovan White says that the club has the hunger for another deep run in this year's competition.

The final draw for the competition is scheduled for next Monday, where the 22 qualified teams will be paired into preliminary and round-of-16 matches for a tournament that has been restructured because of the coronavirus pandemic. Waterhouse secured their place in this year's tournament, having finished as the second-best team in the Caribbean Club Championship group stages. The tournament was cancelled before the semi-finals stage because of the pandemic.

White says that while the team's off-season preparations have been limited to individual work so far, the club has confidence in surpassing last season's quarter-final run. "We are looking forward to the draw. The club is excited with our second consecutive year competing in the Concacaf League. We were very optimistic last year. We remain optimistic this year," White told STAR Sports.

Waterhouse will gain an automatic bid to the round of 16, which will be held November 3-5. As part of the scheduled changes to the tournament, the round-of-16 matches will now be single elimination matches hosted at the highest-ranking club's stadium.

White says that because of the lack of matches that teams have played because of the pandemic, determining the strength and weakness of their opponents would be difficult.

"We are all faced with a similar situation so we are not going to spend our time trying to figure out which team to avoid and which team we want to play because you don't know how good or bad any team is at this point in time," White said. "Especially with Latin American teams and Caribbean teams who have similar situations like ours, where the number of hours on the pitch has been limited."

Among the teams in this year's competition are defending champions Deportivo Saprissa of Costa Rica and last year's finalists, Montagua of Honduras. Waterhouse's 2019 Concacaf League adventure ended in the quarter-finals at the hands of the Honduran club 2-0 on aggregate. The top six teams from the 2020 Concacaf League will qualify for the 2021 Concacaf Champions League season.