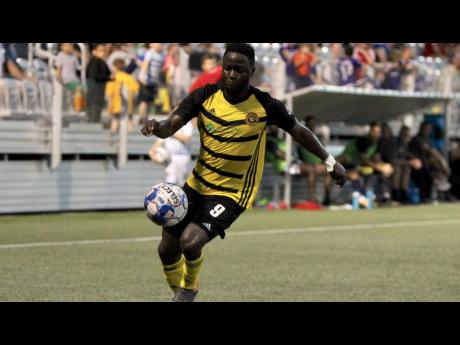 The 28-year-old scored on either side of half-time, enabling Birmingham to dominate the contest at the Riccardo Silva Stadium after finding themselves 3-0 up at the break.

With the victory, Birmingham moved to 24 points, stretching their lead at the top of Group G to four points, with Charlotte Independence lying second but with two games in hand.

Miami, meanwhile, continued bottom of Group H on nine points, having lost six of their 11 games this campaign.

Brett opened the scoring in the 35th minute when he collected JJ Williams' sweeping cross inside the six-yard box, evaded full back Marco Franco before slotting home from close range.

Seven minutes later, Alex Crognale doubled the lead for the visitors with the first of his two goals, producing a glancing header past goalkeeper Mark Pais following Bruno Lapa's corner from the right side.

And in stoppage time, Crognale again found the nets, this time putting in a rebound after Pais had parried a subsequent attempt on goal.

Brett completed his brace in the 55th minute, thanks to a massive error by Pais. The 29-year-old custodian ventured way out of the 15-yard box to deal with a long cross by Williams only to bungle the clearance and watch helplessly as Brett walked the ball into the nets.

Brett has scored nine goals this season behind fellow Jamaicans Junior Flemmings with 12 and Dane Kelly with 10.