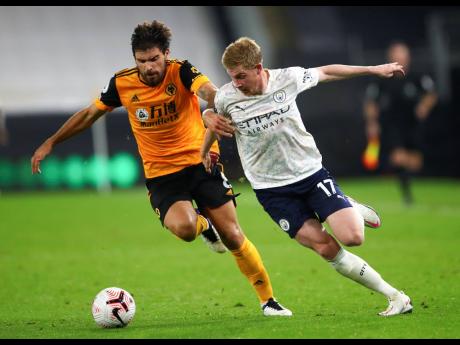 Kevin De Bruyne scored a penalty and had a hand in two other goals as Manchester City opened its English Premier League account, winning at Wolverhampton 3-1 on Monday.

Last season's player of the year in English football, De Bruyne has hit the ground running in the 2020-21 campaign with the kind of all-round midfield display that sets him apart.

A surge into the Wolves area saw him brought down by Romain Saiss, and De Bruyne got up to convert the penalty himself in the 20th minute.

De Bruyne was the architect of the second goal by slipping in Raheem Sterling, who cut the ball back for Phil Foden to slot into an empty net in the 33rd.

Raul Jimenez pulled a goal back for Wolves with a powerful header in the 78th after Daniel Podence cheekily kicked the ball between De Bruyne's legs, ran round him to collect the ball, and curled a cross over for his fellow forward.

Gabriel Jesus made the game safe with a deflected third for City in the fifth minute of injury time after De Bruyne helped to win the ball back.

With Liverpool -- its biggest rival for the title -- already on two wins from two matches, City was under pressure to avoid an early slip-up after starting the season late owing to its involvement in the latter stages of the Champions League in August.

"Wolves has been a bogey team for us the last seasons," De Bruyne said, "so to come here and win is encouraging."