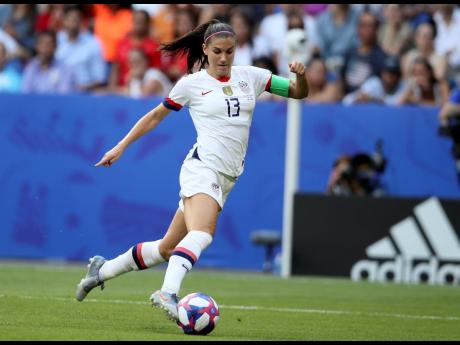 In this July 7, 2019, file photo, United States’ Alex Morgan controls the ball during the Women’s World Cup final soccer match against The Netherlands at the Stade de Lyon in Decines, outside Lyon, France.

Alex Morgan could make her Tottenham debut in an Women's FA Cup quarter-final against Arsenal tomorrow.

The 31-year-old United States forward, who gave birth to daughter Charlie Elena Carrasco in May, has not played since 2019.

Morgan only arrived in London last week after signing for Tottenham from the Orlando Pride but she has been training through the week.

"She is one of our players and as everyone else can be selected to play because all the paperwork has been done," joint Tottenham manager Juan Amoros said yesterday. "We will have to wait until almost the last minute."

The two-time World Cup winner is due to return to Orlando for the National Women's Soccer League next year, but Tottenham is open to extending the deal.

"She has recently been a mum, her husband is still in America," Amoros said. "There are a lot of things that can influence the next step, so we have to go step-by-step on this case and see how they adapt to London.

"The main aim is that she's part of the Spurs family. She is already quite happy with how everything is going and the club and her team-mates are making her feel welcome. Obviously a player of that calibre, we want to keep her for as long as we can. We will see on that but the main thing is that she is happy and fits part of the family."