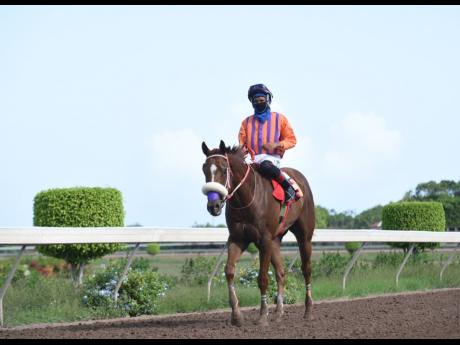 DEEP BLUE SEA's party, three wins in his last four starts, should be crashed by seasoned non-winner-of-four campaigner, FORMAL FASHION, in Sunday's seventh race at five and a half furlongs.

Speedy DEEP BLUE SEA has been all the rage since her regular rider, Raddesh Roman, was cleared by the Jamaica Racing Commission of not allowing her to run on merit when finishing fourth as a maiden behind Wayne DaCosta's MY LITTLE PRINCESS last October. At the time, Roman was attached to DaCosta's barn as a hot claiming apprentice.

A week after racing resumed from the COVID-19 break, eight months after the controversial acquittal, DEEP BLUE SEA squandered maidens by 16 lengths. Two weeks later, the Blue Pepsi Lodge-Antoinette offspring skated past non-winners-of-two by three and a half lengths. However, he was caught close home by PURPLE RAIN when ambitiously stretched out to seven and a half furlongs among non-threes on August 8.

Trained by wily Patrick Lynch, FORMAL FASHION has taken down or finished ahead of far more vicious sprinters than unproven DEEP BLUE SEA. Her last victory, January 26, accounted for BALTUSROL and DUKE, clocking 1:06.0 for five and a half furlongs.

For reasons best known to him, Lynch started the Blue Pepsi Lodge-One More Fashion filly six days later and she was beaten by DEE DANGER at five furlongs round. FORMAL FASHION wasn't seen again, until after the COVID-19 break, June 27.

Running at 98-1 with Delroy Beharie, FORMAL FASHION was among the group of horses chasing SHE'S A HIT, ENGLAND'S ROSE, MAHOGANY and FATHER PATRICK into the lane at five and a half furlongs, turning for home fifth, three and a half lengths off the lead.

Lynch never brought her back until August 6, losing in a three-way photo to super-fit ENUFFISENUFF at five and a half furlongs after chasing TRULY AMAZING off the lead, a race completed in 1:05.3. TRULY AMAZING got her revenge at her favourite trip, five furlongs straight, on September 12, but only a half-length ahead of third-place FORMAL FASHION.

DEEP BLUE SEA continues to rip the exercise track, 1:06.2 for five and a half furlongs last week Sunday. However, she has never been eye-balled by matching speed. Though getting nine pounds from FORMAL FASHION, DEEP BLUE seas should wilt under sustained pressure, especially over the extra half-furlong.