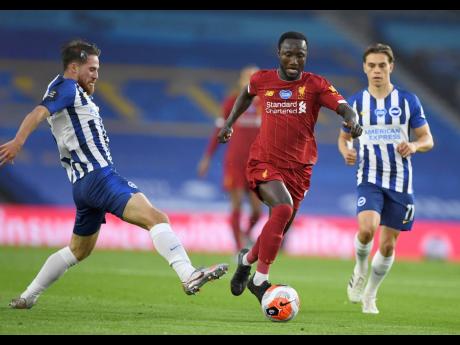 The Guinea national team has cancelled a friendly against Gambia after a coronavirus outbreak in its squad, and Liverpool's Naby Keita is reportedly one of the players who tested positive.

Tuesday's game in Faro, Portugal, was called off after the virus cases and a series of injuries left Guinea's squad with just nine fully fit players and only one goalkeeper among them, the Guinea Football Federation said.

Reports said midfielder Keita was one of five players to have contracted the virus, although that has not been confirmed by the Guinea federation or Liverpool. The federation said only that "several players" tested positive. It didn't say when they were tested.

If Keita does have the virus, he would be the fourth player at the English Premier League champion after forward Sadio Mane and midfielders Thiago Alcantara and Xherdan Shaqiri also tested positive in recent weeks. Keita would have to be isolated for at least 10 days, ruling him out of Saturday's Merseyside derby against league leaders Everton, and possibly next week's Champions League opening group game against Ajax.

Keita, Francois Kamano, Ibrahima Camara, Ibrahima Kone and Florentin Pogba were the players who tested positive in the Guinea squad, according to the reports in Guinea, while Baissama Sankoh also had to be isolated because he had been in contact with the infected players.