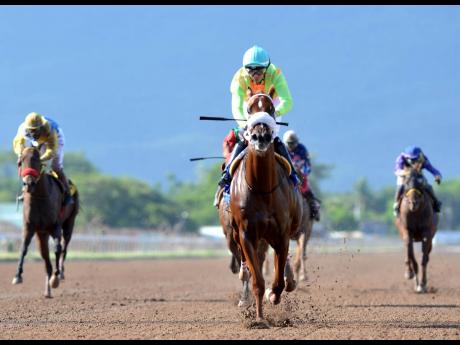 RICHARD AZAN has thrown the kitchen sink at PEKING CRUZ this weekend - first-time blinkers and a nine-pound claiming apprentice - after the five-year-old's encouraging effort with topweight 126lb behind SIR ALTON's fast-time win at six furlongs two Saturdays ago.

Reverting to his favourite trip, five furlongs straight, in Saturday's sixth event, PEKING CRUZ faces course specialists drawn to his outside, RAS EMANUEL and TRULY AMAZING, as he breaks from mid-track, stall six, in the 13-horse field.

ROJORN DI PILOT, who PEKING CRUZ had behind him when placing second at the trip to UNIVERSAL BOSS, on July 18, breaks from post-position one with 121lb, a big impost from a bad draw, allowing his old rival 11lb.

RAS EMANUEL and TRULY AMAZING, are well drawn at stalls nine and 11, respectively, but are allowing PEKING CRUZ enough weight for him to challenge them well before they make their way on to the main track.

At 110lb, shedding 16lb, with which he chased SIR ALTON to the furlong pole, in splits of 22.4 and 45.4, outsprinting TRULY AMAZING, who was forced to run on into second, PEKING CRUZ has moved from heavyweight to flyweight in a match-up of course specialists.

RAS EMANUEL, who always had the luck of the draw against him, stall one, when beaten by DRUMMER BOY on September 5, has 123lb to tote as a stalking sprinter. However, allowing speedy PEKING CRUZ 13lb is a tall ask.

Apprentice Nicholas Hibbert will be up against two of the park's top riders, Nelson astride TRULY AMAZING and six-time champion, Omar Walker, aboard RAS EMANUEL, stern tests for the bug rider. However, if he keeps his cool and a straight course, after angling to the stands' side, PEKING CRUZ should take him home.