Den Street, the horse to beat in Pick 3 Super challenge 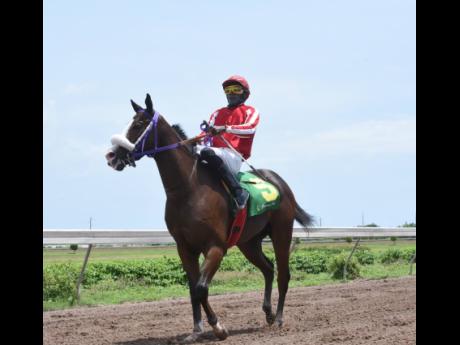 WAYNE DACOSTA's DEN STREET showed real class when running on in the mud at six furlongs in last month's Cash Pot Trophy to nab speedsters HOIST THE MAST and SHE'S A WONDER at the wire, suggesting he should be the horse to beat in Sunday's Pick 3 Super Challenge at seven furlongs.

After being collared by DEN STREET, HOIST THE MAST and SHE'S A WONDER both went on to run admirable races. HOIST THE MAST went down by a neck to imported stablemate, GO DEH GIRL, at five and a half furlongs after being slowly into stride, finishing three and three-quarter lengths ahead of howling favourite, FURTHER AND BEYOND.

SHE'S A WONDER was impressive on her return, dominating rivals at seven furlongs by using her speed to score a comfortable victory in 1:25.4. Both fillies are back for a second crack at the Northern Giant - All For Pleasure colt in the Pick 3.

However, DEN STREET, unbeaten in three starts, appeared superior in the Cash Pot, allowing HOIST THE MAST seven pounds and SHE'S A WONDER 12, respectively. Interestingly, the handicaps out of the Cash Pot have swung in favour of DEN STREET, who is now only four pounds heavier than both fillies, going a furlong longer.

Title-chasing jockey, Dane Nelson, possibly swayed by a six-furlong gallop of 1:13.2 on Monday, has kept faith with FURTHER AND BEYOND despite the colt weakening into third behind GO DEH GIRL and HOIST THE MAST at five and a half furlongs. Though a full brother to this year's 1000 Guineas and Oaks winner, ABOVE AND BEYOND, FURTHER AND BEYOND might not have inherited the staying genes, making him highly suspect at seven furlongs in what will be a hot pace.

DaCosta's, second runner, SIR JOHN, made an encouraging six-furlong debut last Saturday, finishing three and a half lengths behind CACULUS, a real galloper, who seems destined for longer distances such as next month's Jamaica Two-Year-Old Stakes at a mile.

CALCULUS won in 1:13.1, a full second faster than DEN STREET's 1:14.1 in the Cash Pot Trophy. SIR JOHN is a half-brother to DYSFUNCTIONAL by the mare, Luscious, both sharing a strong grand dam line, Royal Pizzaz, who threw the likes of ALL CORRECT, HOVER CRAFT, ALSO CORRECT and ROYALTY.

SIR JOHN's losing time bettered DEN STREET's Cash Pot victory. He was closing at the end and is due every respect going a furlong longer. DaCosta has much faith in Phillip Parchment, especially on closers, having teamed with the journeyman rider to recently land the Jamaica Derby making SIR JOHN the outsider to watch.