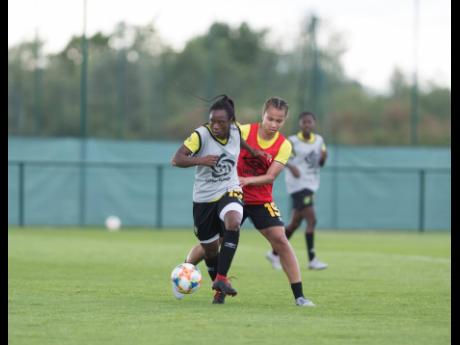 File Tiffany Cameron dribbles away from Toriana Patterson during a Reggae Girlz training session in France on June 10, 2019.

With more games to be added to the women's football calendar next year including the launch of the Women's Nation s League competition, national midfielder Tiffany Cameron says that the new tournament would present an opportunity to fast track the development of the women's game in the region.

Concacaf recently announced an increase in the number of matches in the women's international calendar for the next four years which will include the debut of the Women's Nations League as well as the staging of the Women's World Cup qualifiers and the impending 2024 Olympic qualifiers. The changes were in keeping with the Concacaf W initiative which is responsible for helping to grow the women's game in the region.

The Nations League is expected to begin in 2023 and Cameron says that the tournament would help to improve the competition within the confederation.

"I am happy about the launch of Concacaf women's new nations league. It is an opportunity for growth and further development in the women's game as a whole. I think providing opportunities for countries that may not have the resources like higher-ranked countries within Concacaf do, is so important," Cameron told STAR Sports. "The more competitions we all have, the better the matchups will be against countries within Concacaf."

Meanwhile, Cameron hopes that the Reggae Girlz will resume national football activities in 2021 ahead of the World Cup qualifiers which are slated for later down in the year. She says that having as much training camps as possible would help to facilitate back-to-back qualifications.

"The preparation for the next FIFA Women's World Cup starts next year in November and it's important that we have as many camps as possible next year. Building our chemistry and getting on the same page will be a huge factor in order for us to be successful and qualify for the World Cup again," she said.

The group stage of the qualifiers will feature teams ranked third and below in the region being drawn into six groups of five with a total of four matches being played in November 2021 and April 2022. The six group winners will advance to the 'centralised finals event' which will take place in July 2022. The number of qualifiers from the Concacaf region has not yet been determined.

The 2023 Women's World Cup will take place in Australia and New Zealand with the new expanded 32-team format.