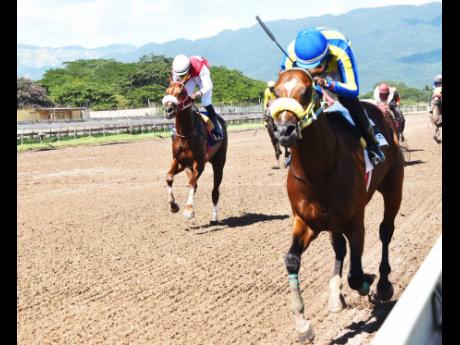 SINCE severing the umbilical cord from Wayne DaCosta's barn late-season, after a strained relationship in 2020, six-time champion rider Omar Walker has been quietly digging heels into rival Anthony Nunes' stable, booting home the likes of GO DEH GIRL, HOIST THE MAST, ALIMONY and UNIVERSAL BOSS, signaling his intentions at the reigning yard.

In Dane Nelson's absence, Nunes has not hesitated to summon Walker to partner BIGBANG in Friday's Fan Appreciation Day Trophy, one of two runners he sends to post at nine furlongs and 25 yards. Champion apprentice Oshane Nugent is astride Nunes' other stayer, TRICKY ONE, who was only a length behind his stablemate at a mile when both were beaten by overnight allowance star, SUPERLUMINAL, on December 5.

Allowing up-in-class TRICKY ONE eight pounds, BIGBANG motored past his stablemate inside the last furlong to claim third place behind SUPERLUMINAL and super-fit LEGALITY. Though he returned to win among million-dollar claimers last Wednesday, SUPERLUMINAL franked the form by clocking 1:37.3 with topweight 126lb.

Among the runners SUPERLUMINAL put to the sword were UNCLE VINNIE, and WILSON, second and fourth, respectively, both of whom are back up in class to face Nunes' BIGBANG and TRICKY ONE, who had them behind when finishing third and fourth in overnight allowance company.

UNCLE VINNIE and WILSON are not the only runners in the line-up who BIGBANG and TRICKY ONE were clear of when beaten by SUPERLUMINAL. CRIMSON, SEBASTIAN, MASTER OF HALL and COCO CHANEL all have tables to turn against Nunes' pair, who are consistent to the core and will love every inch of the trip.

UNCLE VINNIE and WILSON appear to be the likely pacesetters, breaking from stalls one and two,respectively. BIGBANG and TRICKY ONE are notorious slow starters but can depend on the speed cancelling in the stretch run.

BIGBANG appears best prepared of Nunes' pair, galloping five furlongs in 1:01.2 on Christmas Eve. He packs a great finish and could lead home a stable exacta.