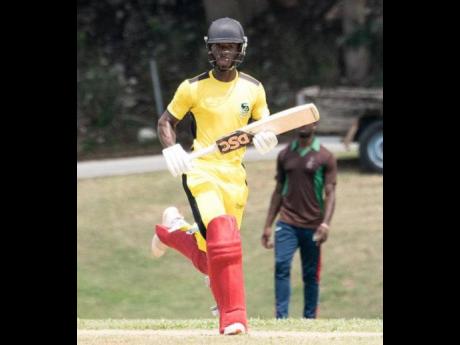 They say hard work does pay off, and for one particular Jamaican cricketer, that notion is finally bearing fruit.

Twenty-five-year-old wicket-keeper batsman Romaine Morris is set to represent Jamaica at the Regional Super 50 limited-overs tournament for the first time, after he was named in the 15-man squad for the tournament which will be held in Antigua from February 9 to 27.

The final year gender studies student at the University of the West Indies, Mona, is one of two wicket-keeper batsmen named in the squad which will be captained by Rovman Powell.

For Morris, the relentless effort is finally paying off, as he will get the chance to play for his country, having represented the Combined Colleges and Campuses in last year's tournament.

"It's a good feeling as I always wanted to play for my country. I have been working some years for this and I am finally getting the opportunity", said Morris.

The left-hander's performance in last year's Super 50, certainly caught the eyes of the Jamaican selectors, as he made 96 for the CCC, opening the innings against Jamaica in St Kitts. He would also chalk up 58 against Canada to finish the tournament with 200 runs in six innings, averaging 40.

Morris and Aldaine Thomas will be battling for the gloves in the team, however, the left-hander who also represented Jamaica at the Regional four-day level back in 2017, says the competition is good for the team.

"We are in the same team right now and what I am really focusing on is my personal development. I have to just do what I have to do and get the job done when I get the opportunity".

Morris credits his improvement in the game to coach Robert Samuels, who he says never gave up on him through the tough times.

"I have to thank my coach Robert Samuels who was always been with me through thick and thin. Even during the covid time, we had some one on one sessions and he is always showing me ways to improve my game day by day," he added.