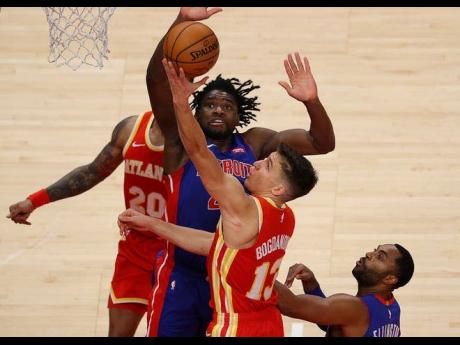 Bogdan Bogdanovic of the Atlanta Hawks tries to lay-up a shot against Detroit Pistons’ Isaiah Stewart in the second half of a NBA match at the State Farm Arena in Atlanta, Georgia, on December 28, 2020.

Detroit Pistons power forward Isaiah Stewart says that he has not ruled out an opportunity to represent Jamaica in the near future as the national senior programme looks towards qualification for the 2024 Olympic Games in Paris.

The 19-year-old NBA rookie is of Jamaican descent through his father, Dela, who migrated to the United States in the 1970s. Born in Rochester, New York, he has embraced his Jamaican heritage from his upbringing and throughout his basketball journey thus far.

While he has played for the United States in the FIBA Under-17 Basketball World Cup in 2018, Stewart said that he has thought about representing the land of his father's birth, and says that should the opportunity present itself in the future, he would consider it.

"I'm sure that's something when we get to that point, I'll talk to my agent, my mentor. But that would definitely be cool," Stewart told STAR Sports. "I always did think about that, representing Jamaica. When the time comes and if I have those options, that would be something that I talk about with my team, my circle."

Stewart was originally drafted 16th overall by the Portland Trailblazers in last November's NBA draft but was subsequently traded to the Pistons. Among the members of his draft class include Jamaica-born players Nick Richards of the Charlotte Hornets and Romaro Gill, who was then undrafted but signed with the Utah Jazz. Stewart says that such players in the league, whether native Jamaicans or of Jamaican descent, can have a positive impact on the sport in the island.

"I see someone like Luol Deng, what he does for basketball in Sudan and all those types of things. I feel like how he brings exposure to his country for basketball, I feel like it's something that can happen for Jamaica," Stewart said.

Stewart is already starting to make a positive impression on Pistons head coach Dwayne Casey, who has praised his tenacity and positive aggression on the court during his league debut against the Atlanta Hawks on December 28. He recorded five offensive rebounds as well as two points and two assists in that game, becoming the first rookie to haul in five offensive rebounds in a debut game since Jonas Valanciunas with the Toronto Raptors in 2012.

Stewart registered nine points, seven rebounds and an assist during Wednesday's 110-101 loss to the Milwaukee Bucks. Currently 15th in the Eastern Conference, they will face the Miami Heat in a two-game set on Saturday and Monday.