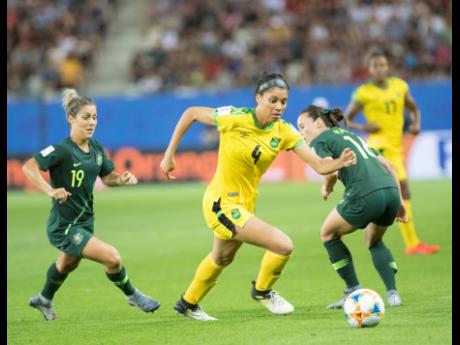 After a difficult start to her professional career in 2020, national defender Chantelle Swaby is heading to Europe, following in her older sister Allyson's footsteps.

The 22-year-old centre back has signed a short-term deal with Scottish club Rangers until the end of the current Scottish Women's Premier League (SWPL) season. The announcement was made late last week on the club's website.

The move comes on the back of a debut professional campaign in the United States that was impacted by the coronavirus pandemic. Swaby was selected by Sky Blue FC in the fourth round of last year's National Women's Soccer League (NWSL) draft but failed to make an appearance in the 2020 NWSL Challenge Cup tournament or the NWSL Fall Series.

In an interview with Rangers TV, Swaby said that the decision to join the current league leaders was an opportunity that she could not turn down.

"It feels great to be here. As soon as I got the call from the coaches I kind of just knew. Right as soon as they called me and expressed how interested they were in me, it definitely was something that I kind of put first on my plate," Swaby said. "It was something that I honestly was really excited to even hear about, and I kind of knew that once I got the call and I saw the video on how they showed their interest in me. It kind of just, I guess, flipped a switch, really, for me."

Her older sister Allyson currently plays in Italy with AS Roma. Chantelle said that the family atmosphere and environment also played a role in signing with the club.

"It's very welcoming. I'm really excited I chose the club, a club that has such a family-oriented team. And that's something that I've always kind of really just gravitated towards and always appreciated," she said. "When I'm away from home, I want to be able to still feel I'm around my family members, and that's something that I'm really interested in -- building a bond with these other girls on the team and the coaches."

Head coach Malky Thompson says that her World Cup experience will be a valuable asset to the team.

"We are really excited to have Chantelle join up with the squad. She is an enthusiastic and hard-working young player who brings fantastic experience from the 2019 Word Cup. She will be a valuable addition to our squad as we look to continue on our strong start to the SWPL season," Thompson said on the club's website.

Swaby will have to wait to make her club debut as league fixtures have been cancelled for three weeks because of the escalating cases of COVID-19 in Scotland.