Calabar standout Wilson back on track! 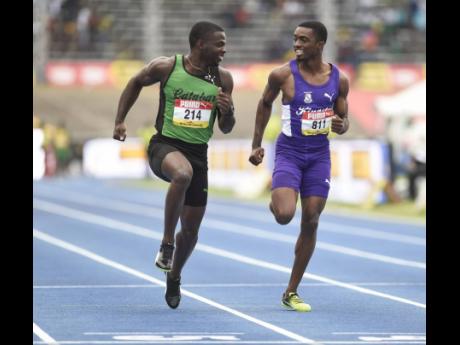 Calabar High School’s Tyreke Wilson (left) shares a laugh with Jhevaughn Matherson of Kingston College during the preliminary round of the Class One boys’ 100m at the ISSA/GraceKenedy Boys and Girls’ Athletics Championships on March 23, 2018.

Omar Hawes, the head coach of the newly formed Legacy Athletics track club, said he is very impressed with the way former national junior sprinter Tyreke Wilson has been preparing himself in training this season.

The 21-year-old Wilson, a standout at Calabar High School during his schooldays, recently returned home from Barton College in the United States and joined the Calabar-based Legacy track club.

And back under the tutelage of Hawes, who guided him to 10.21 in the 100m when he claimed the Class One boys' title at the 2018 edition of the ISSA/GraceKennedy Boys and Girls' Championships.

Hawes told STAR Sports that he is very pleased with the commitment and maturity that Wilson has shown in training and, therefore, he is expecting great things from him this season.

"He has been going pretty good in training and his focus is one that I am really impressed with," said Hawes. "If he maintains the focus that he has now and not get distracted in any way, shape or form, then I expect the results to start coming in as soon as he is fully prepared."

He continued: "He is very committed and he tries to eat well. His weight training is something that he takes very seriously, and so generally he is putting all those things together, and so when the package is complete then we should be seeing some great things."

He underscored that Wilson has performed excellently on the track at Calabar during his high-school career and, therefore, he is expecting the same thing from him as a senior.

"The mere fact that he ran his fastest times as a junior with us at Calabar made it a no-brainer for him to join the club. He ran 10.21 with me in high school, and so I guess if what I am seeing in training comes to fruition without injuries or without any unforeseen misfortunes, then anything better than the 10.21 will be a plus for this first year," Hawes said. "However, we are not going to put any times on him or any pressure, but getting him to a personal best is the first stage of the preparations."