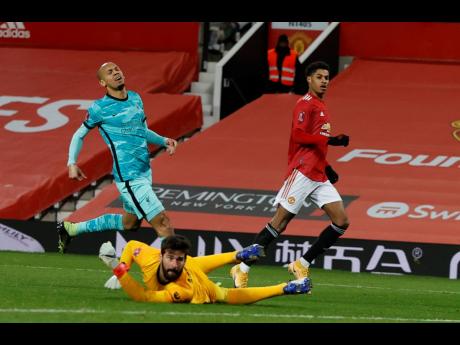 Manchester United’s Marcus Rashford( right) reacts after scoring his side’s second goal of the game during the English FA Cup 4th round match against Liverpool at Old Trafford in Manchester, England, yesterday.

A scream from Andy Robertson was a forlorn attempt to distract Mason Greenwood beginning Manchester United's comeback. The defender won't be the only one shrieking at Liverpool after going out of the FA Cup.

Not that everything went wrong for Liverpool at Old Trafford, with Mohamed Salah scoring twice. The Liverpool striker's opener was cancelled out by Greenwood, and he levelled after Marcus Rashford put United in front. But Bruno Fernandes bent in a free kick in the 78th minute to send United into the fifth round with a 3-2 victory yesterday.

"If you win a game there are negatives, if you lose a game, too, but I saw the boys really, really wanted it," Liverpool manager Jurgen Klopp said. "We had problems on the counterattack. It was intense, but there were positives."

Losing, though, compounded a miserable 70 hours that also saw Liverpool beaten at home by Burnley on Thursday in a further blow to its title defence. It was a 0-0 draw with United a week ago that helped United stay top of the league.

The excitement lacking in the Anfield league encounter was on show a week later at a freezing Old Trafford, with the highest-scoring match between these fiercest of English rivals since 2010.

United were joined by Chelsea, Leicester and Burnley on Sunday in advancing to the round of 16, where it will play West Ham next month.

Liverpool have gone 483 minutes without a league goal but remembered where the net is in the cup. Roberto Firmino thread a pass to Salah, who lifted a shot over Dean Henderson from close range in the 18th minute.

But the lead lasted only six minutes. Paul Pogba's tackle gained possession, Donny van de Beek released Rashford on the left flank by the halfway line, and a diagonal pass landed perfectly at the feet of Greenwood.

The favour was returned three minutes into the second half.

Greenwood played in Rashford through the centre and the striker placed the ball in the bottom corner for his 15th goal in all competitions this season.

But United were made to pay for their slackness.

A sideways pass from Edinson Cavani was too casual and was intercepted by James Milner. After passing to Firmino on the left of the penalty area, Milner was inside the box as the return pass came across. But Milner's stepover let the ball roll through to Salah, who squeezed a shot through Henderson's legs.