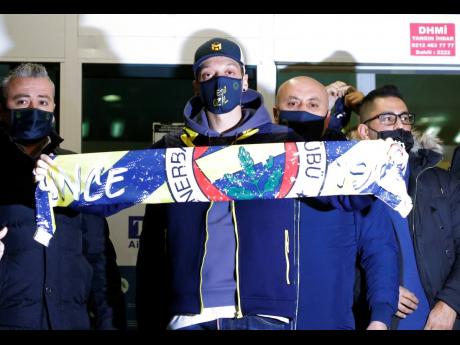 Mesut Ozil, a former Germany midfielder, poses for the photographers with a Fenerbahce scarf after arriving at the Ataturk Airport in Istanbul on Monday, January 18. 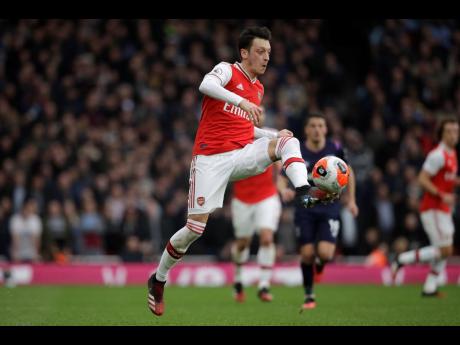 FILE Arsenal's Mesut Ozil controls the ball during the Premier League soccer match against West Ham at the Emirates Stadium in London on Saturday, March 7, 2020.
1
2

Mesut Ozil has thanked Arsenal for an "amazing journey" after his departure to Fenerbahce was confirmed, saying he goes with no grudges despite not playing for nearly a year.

Ozil said goodbye to his Arsenal teammates a week ago, and his move to Turkey has now been wrapped up.

"I'd like to thank the club for this amazing journey over the past seven and a half years," Ozil said on Sunday.

The former Germany international has not played for Arsenal since March and his contract was due to expire at the end of the current season.

"The support I have felt from the team and fans during my time here has been truly incredible and something I will always be grateful for," Ozil said. "Together we won trophies for the first time in years and created memories that will last a lifetime. The Arsenal fans will forever remain in my heart.

"I'd like to thank Edu Gaspar for helping bring about a professional and dignified solution in the past few days, and I wish everyone at the club the best in their attempt to continue to bring Arsenal back to the top, where we belong."

Having started the first 10 games under Mikel Arteta following his appointment in December 2019, Ozil has not featured since a 1-0 win over West Ham before the coronavirus pandemic saw football halted.

He was omitted from Arsenal's Premier League and Europa League squads.

"As I said, the past few months haven't been the easiest," Ozil said. "Like every player, I want to play every minute of football for my team. In life, however, things don't always play out how we want or expect them to.

"But it is important to look for the positives in life and not negatives, which is why I try to live life with no regrets and holding no grudges. Being at Arsenal was more than just football, it was about community."

Fenerbahce formally announced the purchase of Ozil in a statement to the Istanbul Stock Exchange yesterday.

"The transfer of professional football player Mesut Ozil has been agreed with Arsenal FC and a principle agreement has been reached with the player himself," the club said in a brief statement on its website.

A 31/2-year contract had been agreed with the former Germany midfielder, it added.

Fenerbahce President Ali Koc said Saturday that Ozil could begin training as early as Sunday evening. A signing ceremony would be held on Tuesday or Wednesday, he added.

Manager Mikel Arteta said Ozil would be remembered for playing in three of the four FA Cup finals Arsenal won during his time at the club.