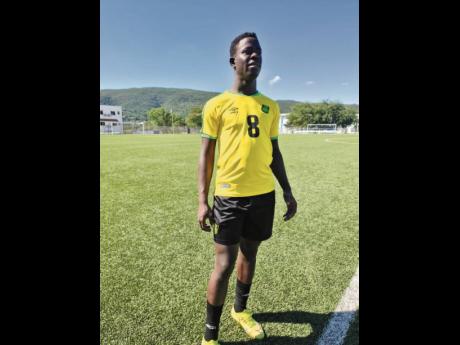 Jahshaun Anglin's meteoric rise from an unknown footballer in 2018 to Harbour View star, national player and now Miami FC player, is a result of people seeing his talent and trying to ensure he understands his potential and walks the right path.

Anglin played his only season of Manning Cup with Kingston Technical in 2016, as a 16 year old, but was expelled the following year and did not fulfil his schoolboy career.

After that he went off the football radar for two years and fell under bad influences and picked up bad habits.

But in 2018 when, Onaje Bell, also his manager, started the MRC football Academy, based at the Rae Town football field, he was told of a talented youngster by the Rae Town youth and Holy Family Primary coach, Raphelita Bonner, who knew Anglin from Holy Family.

Bell went in search of him, found him and got him to training with MRC. Soon after Bell introduced him to Harbour View who liked what they saw.

But for a player who had not played youth club football, adopting to the demands of a professional player had its challenges, Harbour View coach Ludlow Bernard recalled.

He said Anglin had very unusual habits that could have ruined his career. But they detected and understood his shortcoming and persevered with him.

"We tried our best to sort him out and get him to act professionally. But he found himself in an environment he was not accustomed to, so coming training every day, being on time, proper attire and general deportment took a while," he said.

Bell, after learning he was having trouble at Harbour View, stepped in to ensure he stayed in line.

"They saw what I saw but they also saw the indiscipline for being late for training, missing training. But they dealt with him properly. When I spoke with the coach and he told me what was happening, we started dropping him at training.

"But living in Rosemary Lane in Southside, so many things surround him, so we had to help manage him through it," he said.

Anglin eventually learned to adjust and made his Premier League debut in October 2019 and marked the occasion by scoring with his first touch against Vere United.

Since his debut his career has soared. In February of last year he made his international debut against Bermuda and that was followed up by another impressive appearance against Saudi Arabia in November.

Then last month he was signed by Miami FC in the United Soccer League (USL).

Nevertheless, both Bell and Bernard believes the player has a lot to learn and believe his new environment will help him fully understand the requirement for a professional player.

"The method is to get him into the professional environment so he is overwhelmed with occupation and has very little time for anything else. So he is still a work-in-progress," Bell commented.

Anglin's mother, Florence Clarke, agreed Jashaun was not one for training and that had it not been for people like Leebert Haliman, who gave him his opportunity at Kingston Technical, and Bell, Jashaun could have fallen by the wayside.

"Jashaun was unruly. He went to training when he felt like. Coaches would come by and like beg him to come training and he would say he would go but would not go," she revealed.

But now she is seeing the changes. "He has decided that training is a must. He now picks up his bag and head to training without you saying it to him. If he has early morning training he would tell me to wake him," she said.