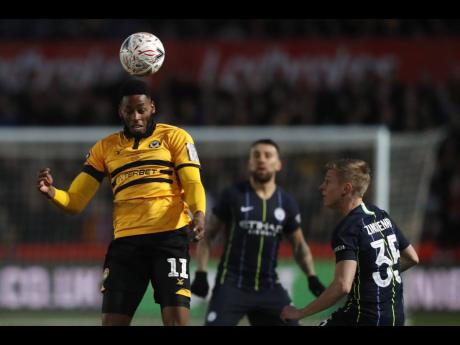 Jamaican striker Jamille Matt returned to Rodney Parade yesterday to help Forest Green strengthen their push for promotion to England's League One with a second-half penalty that sealed a 2-0 victory over faltering Newport County.

Matt, 31, who left Newport last summer after the club were unable to offer a fresh contract because of the coronavirus pandemic, converted the 63rd-minute spot-kick for his 11th goal this term after he was upended by goalkeeper Nick Townsend following Josh Davison's opener two minutes before the break.

The 21-year-old Davison's second goal since joining Forest Green on loan from League One Charlton Athletic in January came from Matt's long through pass.

"I thought he (Matt) was a thorn in our side all game. He was strong, he was a willing runner and was a non-stop pest," admitted Newport manager Michael Flynn whose side have won just once in 13 games, slipping to seventh in the League Two table.

Forest Green's third successive win left them within a point of leaders Cambridge United, who won 3-0 at Mansfield Town on Saturday, but the Gloucestershire outfit have two games in hand.

Newport had been denied victory in the December fixture at the New Lawn when Matt levelled late on. This time the experienced frontman, later named Man of the Match, provided the killer blow after John Sheehan undercooked a back-pass and Townsend brought Matt down with a wild swing.

Both teams struggled to keep possession on a sand-covered pitch in a game that took place 24 hours later than originally scheduled, in order for the surface to recover from bad weather and a rugby match on Friday.

Added Flynn: "Forest Green were excellent in the way they didn't make any mistakes today.

"I said before the game it would be tough to create chances and it was today, they've had two chances from our mistakes and I think they'll win the league.

"That was the worst football pitch I've ever been involved with, but we didn't lose because of the pitch, we lost because we made two mistakes."