Further And Beyond still the best 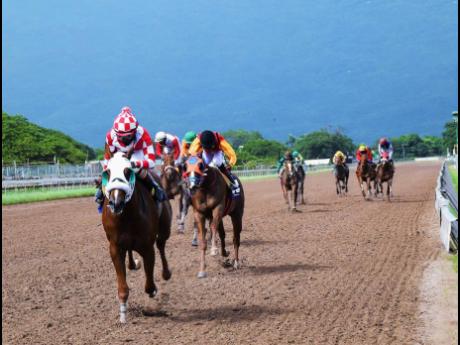 Despite overhauling a pair of fillies, who both appear to be sprinters, SHE'S A WONDER and his stablemate, HOIST THE MAST, to win December's Jamaica Two-Year-Old Stakes at a mile, FURTHER AND BEYOND remains the best three-year-old colt in training until proven otherwise.

Never mind him giving weight all around to eight rivals in Thursday's Prince Consort Stakes. The colts and geldings he faces would have had hell beating SHE'S A WONDER were she offered a spot against them in the seven-furlong event.

Though returning off a three-month lay-up, FURTHER AND BEYOND's six-furlong gallop, 1:14.2, out the mile chute last Thursday, almost equalled the 1:14.1 stablemate CALCULUS clocked when beating REGNANT and BILLY WHIZZ in the Sir Howard Stakes on March 14.

There's simply no terrifying pace in the Prince Consort Stakes to unsettle FURTHER AND BEYOND at seven furlongs, speed on the top end (Blue Pepsi Lodge) and staying pedigree on the dam side (Rumble). His stablemate, BERN NOTICE, tried slipping non-winners-of-two, going a mile last time out, but was caught at the furlong pole by imported ONE DON.

Anthony Nunes certainly has the event gift-wrapped with four runners, three of whom, FURTHER AND BEYOND, CALCULUS and BERN NOTICE, could very well close the trifecta in that order.

Meanwhile, PATRIARCH, who was asked to tear away too early on last and paid the price at six furlongs, a distance at which, when even at his best, has always been suspect, should land the Easter Sprint Cup with the trip cut by a half-furlong.

LABAN, who easily took out two suspect runners, LURE OF LUCY and HOIST THE MAST, to score an easy win at six furlongs on last, should close the exacta.

Though LABAN's winning time, 1:12.4, was faster than the 1:13.0 clocked by SOLID APPROACH to beat PATRIARCH, the five-furlong fraction was nowhere close, 58.3, compared with 57.1, exposing the class difference he now faces.